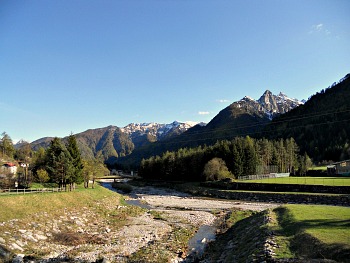 The two villages of Forni di Sopra (Upper) and Forni di Sotto (Lower), historically linked and collectively known as ‘Forni Savorgnani’ – because of the Venetian family that once owned the area, the Savorgnan – are situated on the uppermost reaches of the Tagliamento valley, as it gets narrower and closer to the Dolomite peaks that encircle it (above, a view of the Dolomites around Forni di Sopra, by the Tagliamento).

Given the high mountain setting, it is an area particularly renowned for its natural beauty, but there are also some cultural attractions to be enjoyed – especially in Forni di Sopra, which is, of the two centres, also the more developed as a tourist resort.

A big additional boost to the area has come with the creation of the Dolomiti Friulane Regional Park in 1996 (but plans for a protected area had been afoot since 1973). Nowadays, there are two visitor centres, one in each village, dedicated to a specific theme (The Forest Ecosystems in Forni di Sotto and The Vegetation in Forni di Sopra).

Both villages have also seen the initiative of the “Albergo Diffuso”, which makes good use of renovated old buildings with the aim of bringing new lifeblood to the communities by ‘mingling’ tourism with the local inhabitants through a full immersion in the architecture, history and local traditions of the area.

The Park’s Visitor Centre in Forni di Sopra is dedicated to the flora of the park, and it gradually leads the visitor through different aspects of the vegetation within the Dolomiti Friulane, starting with a general overview on the peculiar life of plants in high-Alpine habitats and leading to the complex relationship between man and vegetation – an interaction also analysed in historical terms.

Here are presented the most interesting naturalistic aspects as well – such as the adaptations that plants undergo in order to cope with the harsh Alpine environment, endemic species, and the way in which plants organise themselves in communities. The structure also hosts a didactic laboratory specialized in botany, with temporary exhibitions on specific themes such as herbs and mushrooms.

A small botanical garden has been realised by the riverside park thanks to a community project that has brought together Regional Park, local municipality and schools; there is also a new trail on edible and medicinal plants. The goal of all these initiatives is that of preserving the historical heritage and the traditions linked to the local cultivations, while arousing curiosity around the topic. This is achieved also through offering practical demonstrations on the preparation of medicinal and culinary herbs – which further contributes to the knowledge of this territory.

The Park’s Visitor Centre in Forni di Sotto, on the other hand, is more specifically dedicated to the forest ecosystems, and is organized on two floors in a modern building in front of the town hall. The exhibition gathers materials of didactic use, with the aim of raising awareness on the nature of the Park and – more in general – on the relationship between man and woodland, with the additional goal of clarifying why this area is worthy of protection (therefore explaining the reasons behind the institution of a Park).

Here, also, are reproduced on a smaller scale the woodland habitats that one encounters when walking along the trails of the Park; more specifically, the following topics are being developed: physiological characteristics of plants, typologies and woodland species to be found within the Park, soil types and techniques of forest management – in the past as well as in the present.

History of the Two ‘Forni’

The name of the two centres gives away something of their origins and of what they have in common too, as ‘Forni’ is a frequent toponym throughout this part of the Alps, denoting some kind of mining activity. Having said that, there are also quite a number of differences between the two communities. 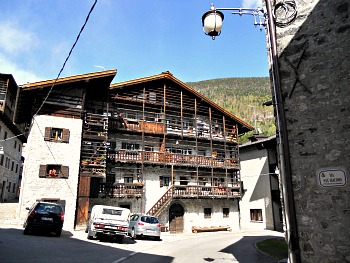 Forni di Sopra is higher in altitude; it is the third most visited tourists resort – and the most visited mountain location – within the region of Friuli-Venezia Giulia. It has also been designated one of the “authentic villages” of Italy, and it belongs to the network of “Alpine Pearls”.

The first historical reference to the village dates 778 AD, though recent archaeological finds suggest that there was already a Carnian-Celtic settlement here roughly 2,500 years ago.

In Forni di Sopra there are also some cultural attractions to be enjoyed: to begin with, the village is quite rich in vernacular architecture, with notable examples of the “Alto Tagliamento” type (see picture above), built mainly in stone with wooden balconies cladding the bulk of the house, and complex systems of external stairs that remind the architecture of nearby Cadore (some more noteworthy examples, such as the one pictured below, are in the hamlet of Andrazza). 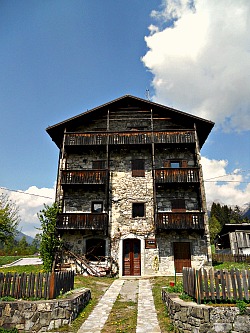 In terms of religious architecture, in Forni di Sopra there is the striking little Church of San Floriano, whose interior is completely covered in medieval frescoes (even though, unfortunately, it is very often closed). In front of it, the main church is not as interesting, but it nevertheless contains a few notable works of popular art. Finally, in the centre of the village there is yet another little medieval church, San Giuseppe (pictured below).

Some finds seem to suggest that the village was already inhabited in Pre-Roman times by Celtic people. Remnants of a late Roman or medieval fortification were discovered in 2008; in any case, the first ascertained document about the area is dated 778 – but it is unclear whether it refers to this Forni or rather Forni di Sopra: a fact which has raised a long-term controversy between the two communities, especially in regards to the pre-eminence of their churches (one of which belonged to the eleven “Chiese Matrici” – or ‘Mother Churches’ – of Carnia).

In any event, in 1326 both settlements of Forni were given as a fiefdom to the family Savorgnan, who kept them in their hands until 1797 – that is, the year of the fall of the Republic of Venice: the longest and most important domination in the area in Modern times. Later, the two Forni belonged to the Hapsburg, and finally they became part of the Kingdom of Italy in 1866.

The single most dramatic episode in the history of Forni di Sotto dates to May 1944, when the village was burnt down by the Wehrmacht with the complicity of the Fascists; all the ancient houses (similar to those still visible in Forni di Sopra today) were therefore lost, and nowadays the only evidence of the past are three elegant 19th century fountains.

These three fountains are indeed the most striking feature in Forni di Sotto, and they can be admired in the centre of the three hamlets that form the municipality – Tredolo, Baselia and Vico (see a picture below). 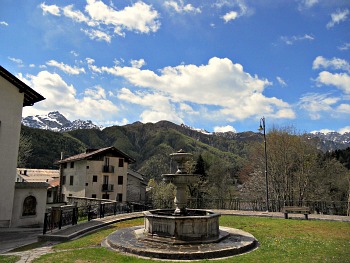 Hikes and Excursions in Nature

In terms of walks and hikes – as it can be imagined – the possibilities from here are endless. The ascent to Passo Mauria (1,298 m) allows to reach the surrounding peaks of the Dolomiti Friulane and d’Oltrepiave, such as Monte Crìdola (2,581 m) and the beautiful Monfalconi (2,548 m), with further possibilities to connect with paths leading into Cadore, towards Monte Tudàio (2,411 m) and also the plateau of Casera Razzo (Sella di Razzo, 1,760 m), from where one can follow on to Sauris (the final image below portays the Dolomites in the area towards Passo Mauria).

An interesting trail leads to the dismissed Val Poschiadea cable car: an important artifact of forestry archaeology which was reconstructed exactly as it was, and positioned where it would have been used as a working tool until the early 1960s.

The trail of the Forcella Lareseit, on the contrary, uncovers the natural environment that connects the high reaches of the Tagliamento valley to the Valcellina, in an area of the Park particularly noteworthy for its high levels of biodiversity.

The so-called “Truoi dai Sclops” (“Truoi” means ‘trail’ in Friulano, the old language of Friuli, while “Sclops” stands for ‘Gentian’) is likely to be the most evocative path on the Forni side of the Park, set among the most representative habitats of the Dolomites – such as thickets of Dwarf Mountain pine, scree, high-Alpine meadows and pastures. This trail is also relevant for the botanic species which can be admired along the way.

All in all, within the area of the Dolomiti Friulane Regional Park there are some 3,000 species of wild plants, and some important endemics still survive: these are species that have differentiated in situ in ancient times (usually during the last Quaternary glaciations), and which have remained isolated in these locations ever since.

Among these, particularly valuable are Arenaria huteri, Gentiana froelichi, the beautiful Lady’s Slipper Orchid (Cypripedium calceolus) and Daphne blagayana – a species belonging to the Thymeleaceae family that was discovered in NE Italy (in the area of Monte Raut and around Tramonti, not far from here) only as late as 1989. 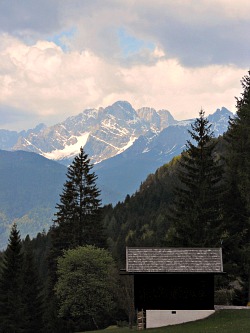