The Dolomites: Mythical Mountains Whose Only Name Evokes A Dream... 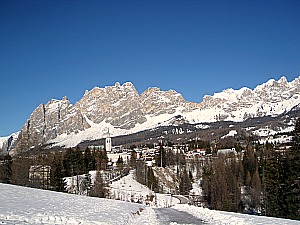 The Dolomites are also called “Monti Pallidi” in Italian; Pale Mountains, as their white rocks glow with golden, pink and purple hues at dawn and dusk.

These magic mountains owe their name to Déodat de Dolomieu, a French naturalist who first studied and discovered the particular composition that forms their bedrock (double calcium carbonate), unique in the whole Alpine range.

In fact, so unique is the tormented geological history of this area – once a tropical sea – that finding fossils and other signs of ancient marine life is all but an uncommon experience.

The Dolomites are in the southeastern corner of the Alpine range, straddling the territory of five provinces in the North-East of Italy (Bolzano/Bozen, also known as South Tyrol; Trento, corresponding to Trentino; Belluno; Pordenone and Udine), with a tiny, disjointed section (the so-called Piccole Dolomiti).

Most of these wonderful mountains fall within the boundaries of the province of Belluno; however, there are still some discrepancies as to how precisely define the geography of the region.

The Heart of the Dolomites could be identified with the pivotal massif of the Sella group (Sellagruppe in German; 3,152 m), from which radiate the five so-called Ladin valleys: this area is also known as Ladinia, as in each of these valleys a different variant of Ladin (an ancient language of Rhaetian-Roman origin) is still being spoken.

The highest peak, however, is the Marmolada (literally, “The Marble Top”), also known as “Queen of the Dolomites”, which at 3,344 m hosts the only notable glacier in the area. The second-highest peak is the Antelao (3,264 m), crowned by its distinctive pyramidal cone, which owes it the name of “King of the Dolomites” (see picture below). So one could well say that these two mountains form a Royal couple! 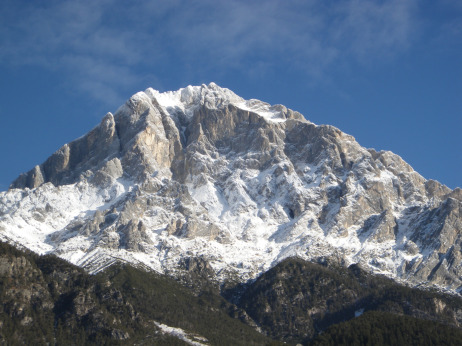 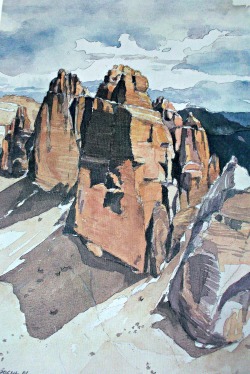 These mountains are a real haven for the flora. Their peculiar geological history – especially during the last glaciations in the Quaternary era – makes them so.

As the valley floors were covered in ice, some of the mountain tops remained free, unhindered by the ice cover: it was thus these summits that were to become “refuge oases” for plant species that remained isolated there ever since.

This is why, still to this day, some mountain tops can be considered almost like open-air Botanic Gardens rich in endemics, such as at Monte Faverghera and Monte Rite.

The most outstanding example, though, is certainly the Vette Feltrine, the most important centre for botanic research in the whole Dolomites, contained within the boundaries of the Dolomiti Bellunesi National Park, as well as Monte Baldo, which however – strictly speaking – is outsite the region but not far from it, slightly to the south-west and near Lake Garda.

In certain cases, proper Alpine Botanic Gardens have been established, such as at Monte Faverghera and on the Cansiglio plateau, near Belluno, or again at Monte Corno, in the Vicenza province, but both these areas are also out of the regions' heartland. Another interesting and historic Alpine Botanic Garden is in Trentino, at the Viotte on Monte Bondone, near Trento.

As can be imagined, within the Dolomites are also contained several natural reserves; one of these is national (Parco Nazionale Dolomiti Bellunesi), while the others are regional (Parco Regionale Dolomiti di Ampezzo in Veneto and Parco Regionale Paneveggio – Pale di San Martino in Trentino); plus there are the five Natural Parks of South Tyrol, in the province of Bolzano/Bozen: Sciliar – Catinaccio/Schlern-Rosengarten, Puez-Odle/Geisler, Fanes-Sennes-Braies/Prags, the Dolomiti di Sesto/Sextnerdolomiten and Monte Corno/Trudnerhorn (not to be confused with the botanical garden mentioned above; below, a beautiful picture of Gentians in the Tre Cime area). 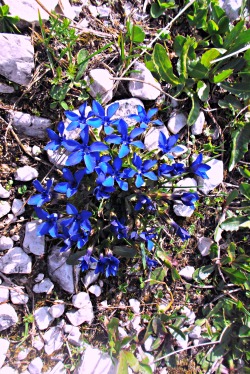 It goes without saying that the whole Dolomite range is a superb area for walking and hiking, with trails of all degrees of difficulty, from the easy amble to the most strenuos via ferrata (iron ways), accessible to experienced mountaineers and rock climbers only. But the Dolomites are of course renowned also for the majestic views that will strike with awe both the geologist and the plant enthusiast; the rambler and the nature lover alike will be at home here – and in all cases, the visitor will be left stunned by a sheer sense of wonder, especially on a first visit.

The Dolomites have been designated as a UNESCO Heritage Site in August 2009 – so that now their beauty will be preserved for posterity, and for the whole world to enjoy. This designation covers nine different sites within the region: 1) Pelmo and Croda da Lago (near the Upper Boite Valley); 2) Marmolada; 3) Pale di San Martino and San Lucano, Dolomiti Bellunesi and the Vette Feltrine; 4) Dolomiti Friulane and d'Oltrepiave; 5) Dolomiti Settentrionali (the northernmost section of the region, falling mostly within the Dolomiti di Ampezzo Regional Park, near Cortina and the Dolomiti di Sesto/Sextnerdolomiten Natural Park in the Alta Val Pusteria/Hochpustertal); 6) Puez-Odle/Geisler; 7) Sciliar-Catinaccio and Latemar/Schlern-Rosengarten; 8) Bletterbach; 9) Dolomiti di Brenta.

But the Dolomites are not just a wonderful natural habitat. They are also a place of myth and of the spirit – see the dedicated page to the mythology of the Dolomites. The shape of these magical mountains will remind you of animals and other fantastic creatures – and sometimes this is reflected in their name (as for example in Monte Civetta – literally meaning The Owl).

Often there will also be references to more ancient legends and fairy tales (as for example in the Catinaccio/Rosengarten), or to their being like natural sundials indicating the passing of time – as in the famous Cima Nove, Dieci, Undici, Dodici and Una of the Dolomiti di Sesto/Sextnerdolomiten, forming the so-called Meridiana di Sesto (Sesto Sundial).

The shapes of these majestic peaks have often been compared to natural cathedrals, pinnacles and needles – a fact reminiscent once again of the almost religious sense of awe that these mountains have inspired on men over the centuries with their grandeur. 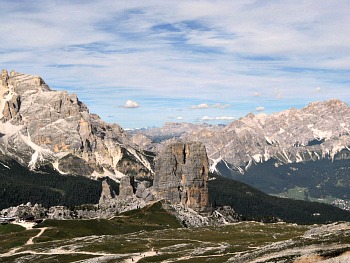 A perfect example of this is the magical outlook of the Cinque Torri (2,361 m; see picture above), the so-called Five Towers, lying as an isolated group on the edge of the Ampezzo basin (Conca di Cortina, near Cortina) – but by far the most renowned peaks in this respect are the Tre Cime di Lavaredo/Drei Zinnen (2,999 m), which perhaps can be considered the real emblem of the Dolomites.

It is also worth mentioning, at least in passing, that by the two locations just mentioned were also fought crucial moments of WW1, as the trench lines of the Italian and Austrian troops were aligned both sides of the border, which at the time straddled these mountain groups. The same considerations would apply also for the Lagazuoi massif (2.835 m), which incidentally offers also one of the best viewpoints in the whole region.

It is impossible to list here all the things that you can see and do when in this most magnificent of regions; for this reason, as a helping tool and orienteering aid, I have devised a page with the Top 10 Things to See in the Dolomites, as well as a selection of Dolomite Pearls. Have a look also at the page dedicated to the Dolomite Sports, which focuses specifically on the area of Cadore.

In any case, coming to these wonderful mountains is an experience that will stimulate and appease all senses at once, enriching you on so many levels (below, another image of the Antelao from Cortina). 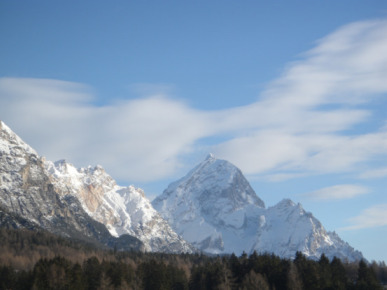 Return from Dolomites to Italy-Tours-in-Nature