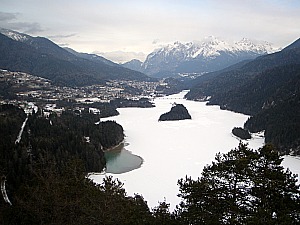 A Small but Proud Independent Community

The historic region of Cadore is Veneto’s northernmost section, part of the Belluno province, and it consists almost entirely of Dolomite terrain (above, a winter view on the region's central area, with the backdrop of Monte Tudaio, 2,114 m, belonging to the Dolomites).

The region of Cadore has a peculiar history of its own, as despite being part of the Republic of Venice for a long time (since 1420 and until 1797), it always retained a semi-independent status – as long as it provided the “Serenissima” (as Venice was then known) with enough wood for its naval fleet.

This independence dates back to 1338, with the creation of the so-called Magnifica Comunità di Cadore – something that literally translates as “Magnificent Community”: an institution still very firmly in charge of preserving the cultural roots – and looking after the historical heritage – of this small but proud region.

But in fact, the history of Cadore goes back a long way before that, when the region was given its name, Catubrigum, which then became Cadubrium – meaning literally “the castle on the rock”, in reference to the castle of Pieve – and eventually Cadore.

The castle fiercely stood on an elevated position, and although it has long since disappeared, this hilltop location can still help to make sense of the region's name.

Cadore had been divided since ancient times (in actual facts, by the Lombards and Francs) in units once known as ‘centene’: a term that makes a clear reference to the territory being administered by splitting it into sub-units, each of which was run by a church (we know that in ancient times – and especially so during the Middle Ages – churches were notable centres of power; therefore, the name of a church was used to represent the whole township in which it was situated).

The most important ‘centena’ was undoubtedly Pieve, the name in itself suggesting that it was already then – as it still is today – the main administrative centre of the region (the term ‘Pieve’ stands for “mother church”, which had some degree of control and coordination over all the others).

The other ‘centene’ were Domegge (in the Piave valley); Auronzo (in the Ansiei valley); Lorenzago and Vigo (forming the so-called centena of Oltrepiave); Valle, Venas and San Vito (in the Boite Valley); Santo Stefano and Candide (in the Comelico sub-region), and finally the centena of Oltremonti, formed by the two communities of Selva and Zoppé (below, a view of Monte Cridola, 2,581 m, as seen from Calalzo). 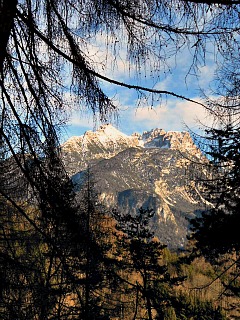 For a time, Cortina was also a ‘centena’ – and thus part of Cadore – until the two territories parted ways in 1511, when Ampezzo was conquered by the Austrian troops and became part of that Empire, then remaining so until as late as 1923.

But enough historical background: all this is just to make the point that, even to this day, the region has retained a certain degree of individuality within the province of which it is part (Belluno), as in fact there has never been a strong connection with the provincial capital – something you will not fail to notice if you walk in Pieve, and come across sights such as the “Palazzo della Magnifica Comunità di Cadore”, historical headquarters of the local government.

But the one thing that the people of Cadore will boast about – and quite rightly so – is the fact that its small capital – Pieve di Cadore – has given birth to one of the greatest painters of all times: Titian – and this is a fact unbeknown to many.

It is something, however, that you will not be able to miss when you are in Pieve: the statue of the painter stands fiercely in the square that bears his name, while the humble dwelling said to be his birthplace is just a few metres away, and so is the main church, where one can still admire the only painting of the Great Master that has remained in his native hometown (in the picture below, a view of Piazza Tiziano – Titian Square – with the painter’s statue). 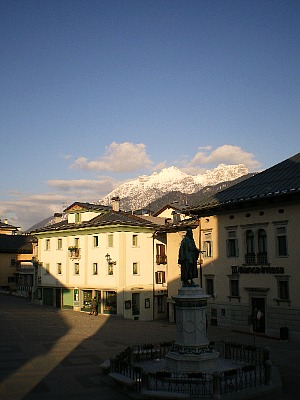 Other signs marking the individuality of the region are more subtle, and would probably require a more in-depth historical knowledge of the territory in order to be detected.

Still today, however, the region retains, in many ways, those original divisions we have spoken about before – probably because they were inspired by the geographical articulation, which remains unchanged in its basic outline. So, if you happen to wander around Cadore, try to capture a glimpse of what makes each place individual. I will try to give you a hand …

To begin with, the river Piave is still very much the main axis of the region, as the sub-regions are roughly determined by their position in relation to it – so that we can distinguish a central section (Centro Cadore) in which the river is at its widest. This is also because of an artificial lake that was created in the late 1940s, the Lago di Centro Cadore (see a picture below).

Radiating from there, and going eastbound, we encounter the upper Piave valley, which goes to form the sub-region of Comelico (crossed by the affluent Padola); the Ansiei valley (that runs through Auronzo, and will take you all the way up to Lago di Misurina and the Tre Cime), and the Oltrepiave area (so-called because it is literally on the other bank of the river, in an eccentric position compared to where most of the other important centres are).

Heading westward, on the contrary, the Boite Valley – the second most important axis of the region – branches off, eventually leading to Cortina.

The ‘Oltremonti’ area owes its name precisely to the fact that it finds itself on the other side of the main watershed, as its two townships – Selva and Zoppé – are more directly reached from – and gravitate on – the Zoldano area, but historically they are also part of Cadore. 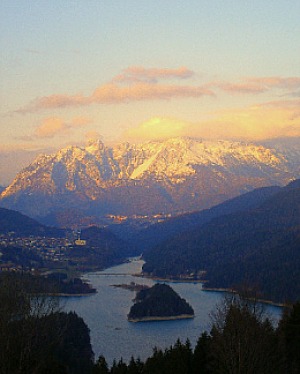 You can also follow the Piave all the way up to its source, eventually reaching Sappada: a German-speaking community with a story akin to that of Sauris in nearby Carnia – a place with a flavour and a charm all of their own.

At the other extreme, the region ends instead by the village of Termine (a name that says it all, as it literally means terminus), situated further down in the Piave valley, at the beginning of a narrow gorge known as Canale di Piave. The houses here are quite tall and entirely built in stone (see image below) – which goes to show the incredible variations in terms of vernacular architecture within the region. 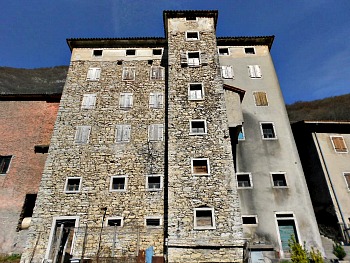 The Traditional Architecture and the ‘Rifabbrico’

In fact, in Cadore the built environment is as worthwhile as the natural assets, and many villages display fascinating examples of traditional architecture. Most of the old houses are built in stone, but with external wooden structures such as cladding or parts of the attic (as for instance in the historic hamlet of Rizziòs near Calalzo, pictured below); however, wide variations are displayed from area to area.

As a rule of thumb, the use of wood increases the further north one goes, and it is in Sappada and certain parts of Comelico that one will find houses exclusively built in wood with the traditional Blockbau technique, of German origin. 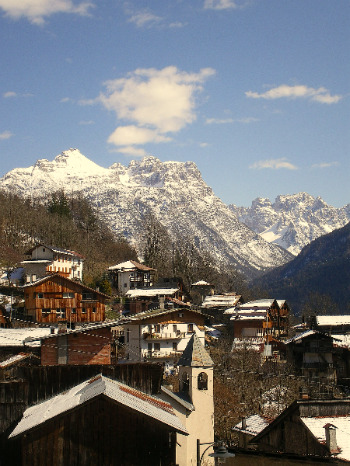 The ‘Rifabbrico’, on the other hand, is an interesting movement dating from the second half of the 19th century, when many old villages were being re-planned like proper little towns and rebuilt in stone, either after damaging fires or as a preventative measure against them.

This happened following a disposition of the Austrian government, dated 1845, which imposed – in the event of fire – the use of stone for all new buildings or those parts of old buildings to be reconstructed. The term ‘Rifabbrico’, originally referred to the re-building of the individual houses, came then to identify the actual reconstruction plans (“Piani di Rifabbrico”) of the various communities, often mapped out with very ambitious projects, and whose traces are still detectable today. The image below, for example, portrays a typically reconstructed ‘Rifabbrico’ house in the centre of Lozzo: the main body of the building is in stone, but there is an open wooden structure under the roof to dry hay.

You may gather that there is quite a lot to enjoy from an architectural point of view too – both civic and ecclesiastic – and more information on ancient buildings and churches is given in the pages dedicated to the individual localities. 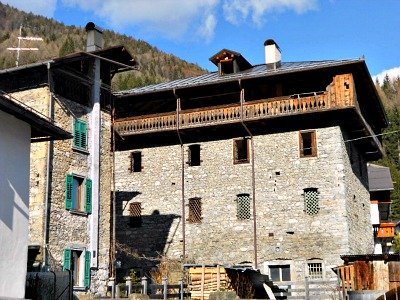 So much for history, geography and architecture, then, but we shouldn’t forget that a lot of the beauty of this area is due to its natural environment – and after all, how could it be any different, in such a unique location?

The Green Heart of Cadore

This region is situated in the heart of the Dolomites, and many celebrated peaks are either completely within its boundaries (the Antelao, 3,264 m; the Marmarole, 2,932 m; the Sorapiss, 3,205 m – for instance, just to name a few), while others are ‘shared’ with neighbouring areas: the Pelmo (3,195 m), for example, has a ‘side’ facing the Zoldano, while the Tre Cime (2,999 m) are on the boundary between Veneto and South Tyrol.

In any event, this is pure Dolomite country, and the jagged, lunar peaks towering high above the emerald green of vast expanses of conifer woods and the vivid green of meadows are what gives Cadore its true identity.

In terms of walks and excursions – as you can imagine – the possibilities are endless. The “Traversata del Cadore”, for instance, is a medium-distance trail that will take you all the way from Perarolo in the middle Piave valley to Auronzo, while crossing the whole central part of the region. It is divided into ten thematic sub-sections, which can also be walked individually, and it is suitable to all abilities (for more information on it, see Domegge).

Otherwise, if you're up for something more challenging, there are countless paths and trails that climb high near the summits; for these, best is to look in the pages dedicated to the individual mountains, such as Antelao, Pelmo, Marmarole, Sorapiss and Tre Cime.

To sum up, one could say that a visit to Cadore is appealing on many levels: you will find here beautiful walks in nature for everybody's tastes, and get a chance to reach out very close to the peaks – should you wish to.

Towns and villages will add instead a note of historic and architectural interest to your stay, and the two levels can combine quite well, offering you the possibility of a ‘balanced’ holiday that will integrate first-rate nature and celebrated views over the famous Dolomites with compelling cultural visits.

Lastly, if you love sports, do also have a look at the page dedicated to the Dolomite Sports, which focuses specifically on the Cadore part of the Dolomites.