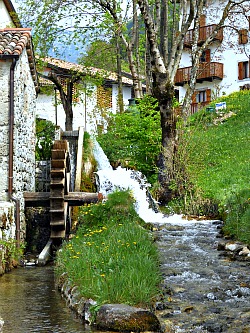 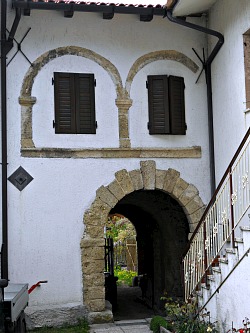 Illegio is a small hamlet literally just ten minutes’ drive away from the centre of Tolmezzo, Carnia’s main centre. Besides being of interest in its own right – because of a few notable examples of vernacular architecture (of which you can see an example in the image below) – its main attractions are an old working watermill (pictured above) and a fascinating event: the exhibitions of religious art which are regularly held here every year.

Situated in a basin encircled by the Monte Strabut, Cuel del Gjai and Gjadieit/Cinglons, Illegio occupies a small alluvial plain that slopes down in a northwesterly direction towards the bed of the stream known as Rio Frondizzon. This favourable geographic location, once defended by numerous fortifications in direct visual communication between each other, gave Illegio – whose Roman toponym was “Elecium” – a certain strategic importance.

The old settlement develops around a resurgent pool of water known as ‘Touf’, where the “Mulin dal Ross” (described below) is situated. The historical part of the village is composed of four densely built blocks, with compact edification around a cross of four streets. The individual blocks are characterized by a very tight housing that conceals several courtyards, which can be accessed through arcades often framed in tufa or other types of stone, or through passages and long barrel-vaulted under-porticoes – known as ‘loibie’ – that communicate with the streets. Losing oneself among these courtyards is one of the main motives of charm in Illegio.

Of particular interest – as a witness of a productive system by now almost completely disappeared – are the six watermills and the wooden saw-mill that were built here between the 1600s and the 1700s.

From the hamlet of Illegio, by walking an atmospheric historical trail, one can reach in about 30 mins the summit of the hill of San Floriano, where is situated the Pieve bearing the same name (Pieve di San Floriano). The original structure of the church can be dated back to the 9th-10th C, and can be referred to a Roman/Byzantine typology of building, while the current Gothic aspect was influenced by German types, and can be dated to the end of the 1400s/beginning of the 1500s. Founded on the ruins of one of the most important fortifications from the Longobardic period (the so-called ‘Castrum Elecium’), the church keeps in its interior numerous frescoes and sculptures coming from well-known workshops of the time. In the valley, several archaeological digs have recently brought to the surface important finds and traces of the ancient past. Although the church is normally closed, the walk is worth it for the vast views that open up on the underlying But valley.

The “Mulin dal Ross” in Illegio is a 17th century watermill still in good working conditions. It was originally based on a rectangular floor plan, and very similar to another watermill nearby. It was part of a complex of buildings separated by the two branches of a canal, of which today only this building remains. Before the demolition of this pre-industrial compound, the date 1670 was found inscribed on the right capital of the entry archway, in the so-called “sottoportico” (archway); this date probably refers to the construction of the watermill (below, see a picture of the watermill from the back, with what remains of the original canal). 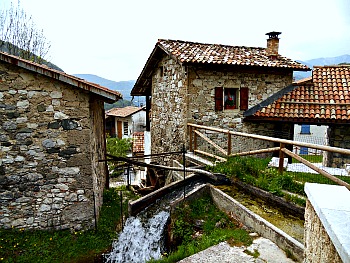 A visit to the watermill allows for an understanding of how life was run on a daily basis in an agricultural setting prior to industrial times; investigated here are also the daily routines, the rhythms and the indispensible resources of a family economy that aimed to be self-sufficient.

It is interesting, perhaps, to consider briefly the different parts that form a working mill. The furnishings of the interior of the watermill consist of the table over which the meal falls, the sieve, the wooden box that hosts the upper millstone, and the hopper that can be seen hanging from a hook at the front.

Outside, the water from the stream forms a small waterfall on to the bucket of the external wheel, which through a black pinewood pole transmits the movement to the mechanism of a dented wheel in the interior. The transmission of the rotating motion from the driveshaft to the millstone happens with the help of a smaller wheel in steel, also placed on a metallic shaft. The distance between the upper mobile grindstone and the lower is regulated by means of a handle, so to obtain more or less rough flour. The meal that falls out from the grindstones is collected over the underlying table, from which it is sieved afterwards (all the different mechanisms described here are portrayed below). 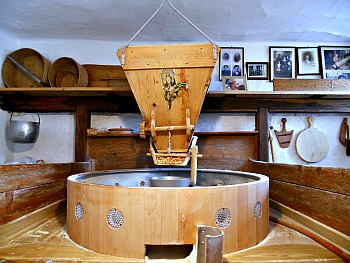 Let's now consider the different parts of the mill in a bit more detail. The hopper (Italian ‘tramoggia’) is a wooden container of pyramidal shape, with a reversed rectangular base that allows for different amounts of cereals to pass through it. It also holds a device for the measurement and dosage of the quantity of cereals that have to be ground as raw material, as inside the hopper there are notches that correspond to the ‘pesenal’ – a local measure that was once used for regulating payment of the meal.

The wheel, activated by the canal running underneath the building, was used to transform the power of water into mechanic energy: twenty-four scoops, inserted in the wheel’s arc, made it resist the strength of the water, as well as the centrifugal force generated by the rotation.

The driveshaft is carved out of a single piece of black pine, over which holes are pinched in order to fit the wheel’s beams. At the extremities are hinges, which lay on a small block of yew-wood that acts like a small cushion, absorbing the stress coming from the hydraulic wheel; the yew-wood block is in turn inserted in a small block of oakwood.

A smaller dented wheel (Italian ‘pignone’) in steel – but originally it was also in wood – is fixed on a rectangular metallic base, and it is inserted in the upper turning millstone.

The main millstone is carved out of a block of conglomerate – a naturally hard rock. It has a lenticular form, and its inner part is concave. The grooves, arranged in an arc, are used to channel the air to the interior of the two grindstones, in order to prevent the flour from becoming overheated – which would make it ferment. The cereals that fall from the hopper enter between the two millstones through a central hole.

Rubbing against each other, over time the two grindstones start to wear out; their surfaces  becomes smooth, and so from time to time it is necessary to put them through a process called in Italian ‘bocciardatura’ (a sort of ‘hammering’), which makes them rough again: this is in order to get a good whole- or semi-whole meal that can then be sifted in different ways, and to obtain various graduations of grittiness – with several types of flour as a final result (in the picture below, the front of the watermill in Illegio). 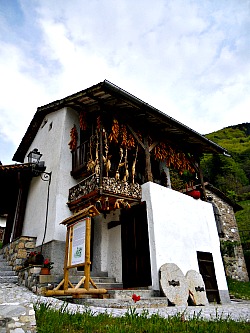 The Exhibitions of Religious Art

As far as the other attraction that makes Illegio worth a visit, there is an important event taking place here every year: the exhibition of religious art, which is organized yearly under the banner of “Culture and Faith Meeting in an Alpine Village”.

The exhibition runs normally from May to October, and each year it is centered around a different theme, usually related to some aspects of local or regional history. The first edition – in 2004 – was dedicated to a quintessentially Alpine saint, San Floriano; then in 2005 the theme was ‘Mysterium’, followed by St. Martin (2006), Apocalypse (2007), Genesis (2008), the Apocryphal Gospels (2009), Angels (2010), Afterlife (‘Aldilà’ in Italian; 2011) and, lastly, The Children and the Heavens (I Bambini e il Cielo; 2012). The theme for this year’s edition (2013) is the Cammino di Pietro
(St. Peter’s Chemin), as treated in religious art.

These interesting events take place in the atmospheric setting of the so-called Exhibition House (“Casa delle Esposizioni”), and are organized in association with both the Ethnographic Museum in Udine and the Museum of the Arts and Popular Traditions of Carnia in Tolmezzo.

In occasion of the exhibition, the little Church of San Floriano – normally closed – is also being opened up. This interesting Gothic building lies at the end of a pleasant 30 minutes' walk towards a hilltop, on a very panoramic location from which the views open up on the But valley

Return from Illegio to Carnia Musei