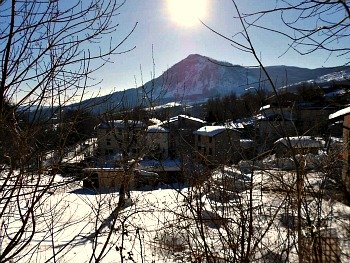 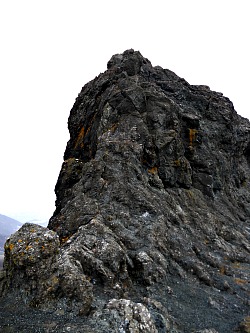 The excursion to Monte Beni (1,259 m; pictured above from the village of Pietramala, near the Raticosa Pass), despite not being a very well-known and frequented one, is actually one of my favorite walks in the Northern Apennines – and perhaps precisely for that reason! It is also one of the easiest treks in the area,  most fulfilling for its sights – and that is why I decided to dedicate a page to it.

In spite of the altitude – seemingly not very high – the summit of this small, isolated crag offers magnificent and almost uninterrupted views. This is because the central ridge of the Apennines in this section is quite low, and it also has the peculiar characteristic of being peppered with ophiolitic stones, which are – in all respects – fragments of volcanic rock that were stranded here in geological times: Monte Beni is one of them, but the most famous in the area is undoubtedly the black outcrop of Sasso di San Zanobi, linked also to a famous legend (see an image below).

You may therefore find it a bit strange to be surrounded by a territory that looks in so many ways quite open and ‘soft’, but then gets suddenly animated by these dark, weird ‘humps’ that look as if they have been plonked here from nowhere, lending an eerie quality to the landscape.

The starting point for the walk on Monte Beni is at Covigliaio, which is a tiny village between the Raticosa (Passo della Raticosa, 968 m) and Futa (Passo della Futa, 903 m) passes. The walk begins with a section of mule-track across open fields that provides a good opportunity to get acquainted with the typical topographic features of this part of the Apennines.

Small, newly-born rivulets tumble down from the surrounding mountains, and their presence can be detected by lines of trees that look like veins, running across the fields as if on a living body. The trees along the streams are typical native species of damp habitats – Black Poplar, Alder, Willow.

Along the path, you can also see other tree species that are quite common in the area; amongst them, Field Maple (Acer campestre), some old specimens of Wild Pear (Pyrus communis), Ash (Fraxinus excelsior) and a tangle of bushes dominated by species such as Hawthorn (Crataegus azerolus and C. monogyna), Common Dog Rose (Rosa canina), Cornelian Cherry (Cornus mas) and Sloe (Prunus spinosa) – all of them creating splashes of color with their berries, as well as providing much cherished food for the local birds in winter.

As you keep climbing, you’ll meet a thicket of conifers on your right: this is quite an interesting example of a plantation in the style that was dominant in Italy in the 1960s, when the habit was to bring together exotic conifer species and plant them in single thick, parallel rows that made the trees soon look sickly and out of touch with their surroundings. But this is not what happened here: maybe because of the open location, and the variety of species used, this particular clump of conifers looks at home here, fits in quite naturally, and is well established – the plants certainly look healthy, and the aesthetic outcome is quite pretty too (approaching it from some distance, especially when it is clothed in mists, Monte Beni always reminds me of one of those Japanese prints – or Chinese paintings – portraying an isolated rocky outcrop with some pines grabbing on to it).

Amongst this particular clump of conifers, you will see specimens of Douglas Fir (Douglasia menziesii) – whose needles taste like lemon when chewed; Atlas Cedar (Cedrus atlantica), which looks very much at home on this slope (perhaps unusually so), together with some specimens of Norway Spruce (Picea abies) – the latter a much more common sight in the high Northern Apennines, even though they are an introduced species too.

Walk further still, and Beech – which is the dominant species in the Apennines from roughly above 1,000 m – start to predominate, while the views on the surrounding mountains become wider and wider. Past a small pond to the right, the road terminates by some buildings, after which one has to continue on the path, which is well-marked (as usual, with the red-and-white striped CAI signs).

This is the most interesting section of the walk, as the path is pleasantly woven through thickets of beech interspersed with some maples, wild service trees (Sorbus torminalis) and the occasional Hornbeam in the warmer spots (Carpinus betulus), while we are far too high for Chestnut trees (which are such a common sight in the Apennines at medium altitudes). 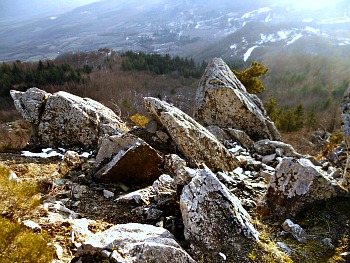 The path then rises gently with twists and turns among picturesque rocky outcrops (see picture above), allowing for ever wider views. At a bend, the appearance of a Holly tree (which is actually quite a rare sight in the Apennines) greets the walker with a note of green and a splash of red even in the middle of winter – a particularly striking effect when snow is lying on the ground (and I have to admit that these are the conditions when I especially like to take this walk – even though the exposed location makes it usually quite chilly up here; in fact, in good weather, the price to pay for those very same northerly winds that guarantee high visibility is the biting cold).

From the top of Monte Beni the view is incredibly vast, as it goes all the way around at almost 360°: the only section of the horizon not to be visible is covered by the close summit, to the north-west, of Monte Oggioli (1,290 m), topped with masts; as for the rest, the views open up on vast beech forests on the surrounding low mountains (see picture below).

To the north, the views look over a vast range of hills that eventually fade to the limitless plains of Emilia-Romagna, with the outskirts of the regional capital – Bologna – in the background; to the north-east, with a good pair of binoculars, on a clear day you will get a glimpse of the vast expanses of water of the Valli di Comacchio, and the Adriatic sea just behind them. In fact, especially on cold winter days, even the Alps are visible as a backdrop to the Val Padana – the Po valley plains, more often than not choked in a sea of purple, smoggy mists and fogs. 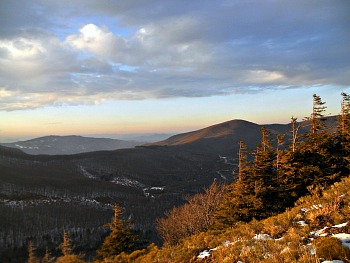 Looking east, the main ridge of the Northern Apennines is in sight with relatively high mountains; especially prominent are Monte Falterona (1,654 m; where the springs of the Arno are located) and Monte Fumaiolo (1,408 m; here, instead, are the sources of the Tiber) – even though these peaks are often covered in mists and low clouds (see a winter image of these mountains below: this is the season when the chance of clear days, on Monte Beni, is at its highest).

On the other side – looking south, that is – the sunnier and more open slopes of Mugello are revealed, eventually precipitating on the Tuscan plain (where Florence lies), while to the west-southwest the highest section of the Northern Apennines main ridge displays a sequence of summits, from Corno alle Scale (1,945 m) to Monte Cimone (the highest elevation, at 2,165 m) and eventually to distant Monte Cusna (2,121 m), between the provinces of Modena and Reggio Emilia, in an area covered by the notable Alto Appennino National Park. 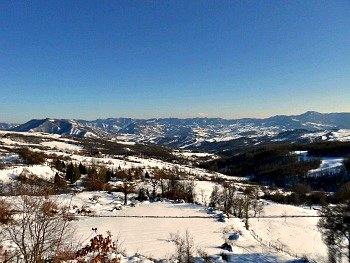 Return from Monte Beni to Italy-Tours-in-Nature