Monte Sole, the only Natural/Historic Park in Italy, Nestled in the Heart of Bologna Apennines, birthplace of painter Giorgio Morandi. 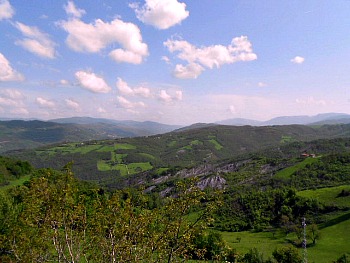 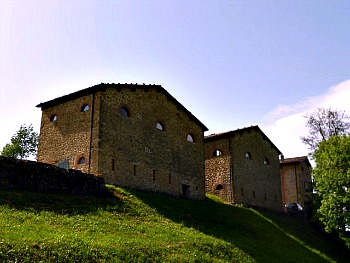 The Monte Sole Historic Park is found in the mid-mountain region between the Reno and Setta valleys (pictured above). The historic park – the only one of its kind in Italy – is situated around the site of the Nazi-fascist slaughter of Marzabotto in the autumn of 1944; for this reason, today this is also the seat of the School for Peace. Visits to the park – apart from the Memorial itinerary – can take in various excursions, such as the Water Itinerary (the Roman aqueduct is particularly interesting: a total of 18 km of tunnels running all the way to Bologna) and also include a route dedicated to the painter Giorgio Morandi (read below).

The Campiaro Barns and Giorgio Morandi House and Museum

Built at the end of the 1950s, Giorgio Morandi’s House has been donated to the municipal administration of Grizzana by the testamentary legacy of his sister Maria Teresa (who died in 1994 just in this house), at the condition of maintaining the house how it was and open it to visitors. Although in a smaller scale, this humble two-floor building was planned in accordance with the house situated right in front of it, the Veggetti’s, where Giorgio Morandi’s family had been coming on holiday since 1913; it is also located right in the place from where the artist used to paint the landscape of Grizzana – particularly the Campiaro barns (whose sequence is pictured below), the Veggetti’s house and Villa Tonelli, but also the so-called hay-lofts of ‘Sete’ and ‘Lilame’, with the mountains of Veggio in the background. This landscape hasn’t practically changed since 1913, and now – with the official opening of the barns and the house – the locality of Campiaro has become a ‘Morandi island’: an open-air museum for the lovers of the great Bolognese maestro.

The artist’s stays in Grizzana begin in 1913, due to the necessity of his sister Anna to spend some time away from Bologna, in a place with good and healthy air; also, being a family of teachers, they could enjoy the luxury of long stays. They get to know Gaetano Veggetti, mayor of Grizzana in the early 1900s; Giorgio Morandi with his three sisters and the mother are hosted first in his family house, inaugurated just the year before. It is a successful meeting: the sister’s health improves and Giorgio falls in love with the place; consequently, they start to come here every summer, except those from 1934 to 1938 that they spend in Roffeno, a few kilometers away (read below).

Between 1943 and 1944 the family spends a year here as evacuees, hoping to find a better situation than in Bologna, but actually – in July 1944 – in nearby Pian di Setta occur several violent Nazi-fascist reprisals, anticipating the terrible slaughter at Monte Sole the following autumn. Therefore, they go back to Bologna less than two months before the start of the biggest massacre that occurred in Italy during WW2 at the expense of defenseless civilians.

And so here we are, in the Historic-Naturalistic Park of Monte Sole, for these terrible events involved the populations of the mountains around Grizzana, Marzabotto and Monzuno – the same municipalities where the park was instituted, expressively in memory of the facts of 1944. From here you can leave in the direction of either Monte Sole or Monte Salvaro following one of Giorgio Morandi’s itineraries, which cross places that have been immortalized in the maestro’s works.

Coming back to the history of the painter now, it is precisely after such traumatic events that the Morandi decide not to come to the area for a few years, preferring to spend the summer in the Alps instead – but the appeal and calling of Grizzana is too strong for the artist. So the family starts coming again, and they initially stay at the Pensione Italia, from where Morandi can paint the ‘Poggio’ – one of his beloved landscapes in Grizzana – until they finally decide to build their own house, buying the land at the end of the 1950s from the same Veggetti family where they originally stayed, and choosing a location right in the place where the artist used to stop for painting his preferred landscape: the hay-lofts of Campiaro (of which another image is shown below). Giorgio Morandi spends here his last summer in 1963; he will die the following year in June, in Bologna. 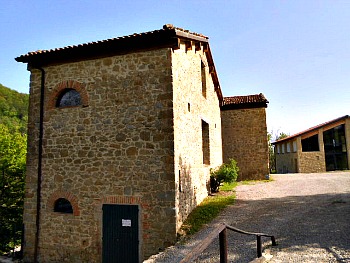 A Visit to Morandi’s House

When visiting the house, the rooms of particular interest are the library, the studio and the bedroom. The library reveals the painter’s preferred literary tastes, and in many of the books are written dedications by the authors to Giorgio himself or his sisters, evidence of the frequent contacts he had with the world of culture at large. On the walls there are some photographic reproductions of his watercolours. The dining room – like the library – shows essential but elegant furniture. On the chest of drawers there is a portrait of Giorgio, Anna and Dina (two of the sisters) plus some objects, shells and more books, with magazines speaking of the artist.

On the ground floor we also have the sisters’ bedrooms and the kitchen, while up on the first floor we find the studio-laboratory, with the daily working tools of the artist and many items (pots, vases and jugs) which served as inspiration and subject of so many of his still-lives – and everything was left exactly as it was that last summer in Grizzana of 1963. The studio-laboratory is of course the highlight of a visit to the house, as here can be seen frames, canvases, brushes; in a corner is a portable easel with a bag of colours and another studio easel is placed a little further, right by the light entering from the windows, from where Morandi could paint the barns and houses of ‘Sete’ and ‘Lilame’ (the view presented below is actually taken from the studio’s window). 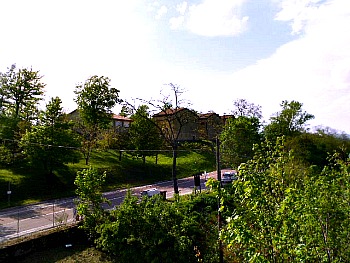 Even the bedroom, like the rest of the house, is evidence of the strong sense of simplicity that pervaded the artist’s life (just the little table is an ‘intrusion’ placed there by his sisters, who reclaimed more space in a house which – even if it had two floors – had just very essential, small rooms).

However, it’s a very different experience visiting this place rather than the house-museum in Bologna, as there the studio and the bedroom were one and the same room; this is a lot more intimate experience, which conveys better the personality of the artist. Besides, on this floor there is an additional room for the sisters and also a little balcony; on the walls we see more photographic reproductions of some of Morandi’s works, while in the garage is kept the FIAT 850 – Maria Teresa’s car – bought later by Francesco Veggetti, who donated it to the municipal administration of Grizzana in 1997 and is now part of the collection. For a free guided visit of Giorgio Morandi’s House (50 minutes) one can refer to the “Centro di Documentazione Giorgio Morandi”.

And now a few biographical notes on the artist. Giorgio Morandi was born in Bologna in 1890, then he applied to the Art Academy of the same city, where he qualified in 1913. In the summer of that year, for the first time, he went – together with his family – to Grizzana, where the young artist started to paint his first landscapes. In 1930, thanks to his growing reputation, he was assigned the chair of Engraving Techniques at the Art Academy in Bologna; in that same year, he attended the ‘Biennale’ of Venice with four etchings and a series of engravings. In March 1932, a whole issue of the magazine ‘L’Italiano’ was dedicated to Giorgio Morandi, also with an important article by Soffici (another renowned painter of the time) and the reproduction of many of his works. In this way started the official ‘consecration’ of the artist, which was then confirmed – in the following years – by further critical appreciation and a public acclaim that would build Giorgio Morandi’s ‘official’ image – at that point not debated anymore. As anticipated above, Giorgio Morandi dies in Bologna in 1964.

The big anthologic exhibitions, starting with the one held in Bologna in 1966 – not long after his death – and ending up with the more recent initiatives organized in Italy and abroad by the Giorgio Morandi museum, with the support of the municipal administrations of Bologna and Grizzana, have contributed to make Giorgio Morandi’s personality better known to scholars and the world wide public alike. The painter – inextricably linked with Grizzana – is now definitely considered one of the most important international visual artists of the 20th century.

On a final note, what can undoubtedly be said is that Giorgio Morandi and the landscape of Grizzana – like Corot and the Roman countryside or Van Gogh and Arles – blend together in a continuous cross-reference between Art and Nature. But, even locally, Grizzana is not alone: another place linked to Morandi in the Apennines is Rocca di Roffeno, on the other side of the Reno valley: here, in the ancient manor of Monzone (15th century), the artist spent the summers between 1934 and 1938 (read above), where he also painted a series of landscapes.

The last battle-front of WW2 in Italy – the central section of a line stretching all the way from the Ligurian sea to the Adriatic – took advantage of the natural defences of the Northern Apennines. This barrier – known today as ‘Gothic Line’ (or Linea Gotica in Italian) – has left many memorial sites alongside the places it was crossing.

In the Bologna Apennines, in particular, the line is remembered around the area covered today by Monte Sole Historical Park; furthermore, at the Passo della Futa is the largest German military cemetery in Italy, situated on an elevated location which commands extensive views both over Tuscany (the Mugello region) and the hills and mountains of the Bologna Apennines (see that page for more information on this area).

Return from Monte Sole to Emilia-Romagna

Return from Monte Sole to Italy-Tours-in-Nature