The ‘Tre Cime di Lavaredo’: the Most Iconic Sight in the Dolomites. 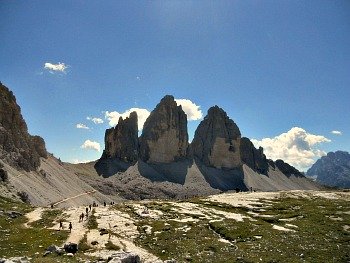 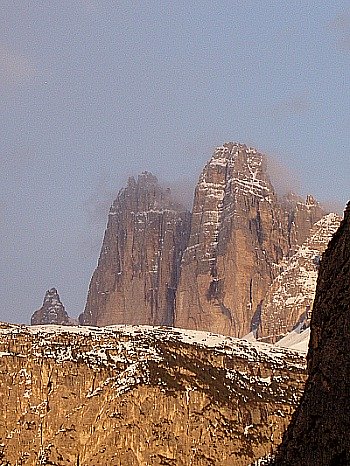 The Tre Cime di Lavaredo (2,999 m; Drei Zinnen in German) are one of the most renowned places of the Dolomites, and one of its most iconic symbols – possibly because the three famous jagged peaks dominate the surrounding landscape, and are an unmistakable landmark that can be seen from miles afar (above, the classic view of the Tre Cime; while below, the three peaks as seen from the well-known gap in the val di Landro/Hölensteintal valley).

What is quite unique about these peaks is the fact that their majestic shapes are completely isolated on all sides, so that more than other mountains they retain that sense of uniqueness and of individuality that is so typical of the Dolomites: this aspect is taken here to the extreme in the most striking way.

Being such a symbol, though, has its downsides. Firstly, it means that the Tre Cime are hugely popular, and somewhat spoiled by the fact that they can be reached by a motorway-like toll road that gets very close to the actual peaks.

The implication, as it can be imagined, is that a huge number of tourists make it up there, but – and that is the good news – many of them just stop at Rifugio Auronzo (2,320 m, at the terminus of the toll road), or at best walk along the almost flat section of path that takes them to Rifugio Lavaredo (2,344 m). It is worth pointing out, however, that even within this first stretch there are items of interest; most notably, the dinosaurs’ footprint which appear on a vertical slab to the left of the trail (anti-clockwise); however, there are no signs to indicate it, so you either have to keep your eyes open ... or come with a guide!

Relatively few venture any further, on the circular trail that would take them on a complete roundtrip around the three peaks (pictured below, the small Antorno lake, just before the beginning of the toll road that leads up to Rifugio Auronzo). 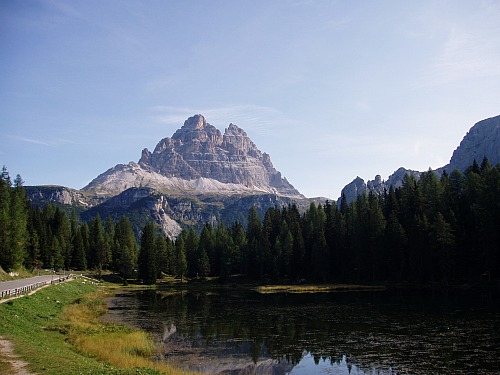 However, if you are a dedicated walker, Rifugio Auronzo can be reached also from Auronzo itself, in about 4 hours. There are other connections with more mountain huts – such as Rifugio Zsgimondy-Comici (2,224 m; 3 hrs) in the Dolomiti di Sesto/Sextnerdolomiten and Rifugio Fonda Savio (2,367 m; 2h30), just above Misurina lake.

Although the description of the lake is not the aim of this page, it is worth pointing out, at least in passing, the magnificent views that can be enjoyed from here: despite the fact that it can become quite crowded in the high season, the location is indeed worth a stop – especially so for the mesmerizing view over Monte Sorapiss (pictured below), 3,205 m. 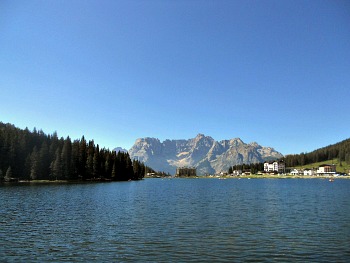 The Circular Trail Around the Tre Cime

The area of the Tre Cime is also covered by a Natural Park: the Parco Regionale Tre Cime/Drei Zinnen Naturpark, mostly situated in the municipalities of Dobbiaco/Toblach and San Candido/Innichen, in neihgbouring South Tyrol. While there is a dedicated page to the Park, the content of this page is to concentrate on more general information on the area.

The circular trail around the Tre Cime is a beautiful and not too strenuous walk, although it can be quite long. It takes an average of 3 to 5 hours to complete, according to speed and… length of breaks!

So, in actual facts, it can take much longer, and what I suggest to all visitors that come to the Tre Cime – especially on a first visit – is to set aside a whole day, and allow plenty of time for this most magical of experiences.

Of course, the views are majestic, and undeniably the prime feature of interest. These open up on the whole Dolomites’ region and beyond, changing almost along every step of the way (in the picture below, a view towards Auronzo, taken from the beginning of the circular trail described here). 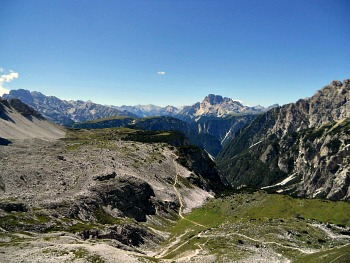 But the historical aspect is also to be taken into account, with so many traces of the events of WW1 still visible today – such as, for instance, the caves at Monte Paterno/Paternkofel (2,746 m), which one encounters on the ascent towards Rifugio Locatelli/Dreizinnenhütte (pictured below, the high altitude plateau around the Locatelli mountain hut, seen from the base of Monte Paterno and with the Dolomite peaks all around).

This mountain is also the location of the story of one of the best Alpine guides of his time, Sepp Innerkofler, who actively got involved in the war events for his deep knowledge of the area (and actually lost his life during the conflict). Perhaps the most striking remnant of those infamous times, though, is the long tunnel which was dug in the mountain’s belly in order to reach its summit, and which can now be visited only with the appropriate protective gear. 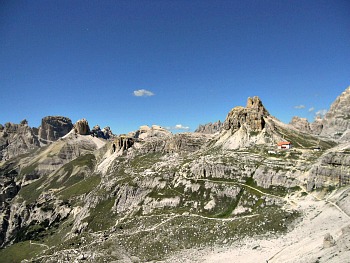 The Rifugio Antonio Locatelli/Dreizinnenhütte (2,405 m; pictured below) is one of the historical mountain huts of the Dolomites, built as early as 1882 (when the area was still Austrian).

This is probably the ideal stopping point if you have embarked on the circular walk from either side, as the hut is situated roughly half-way (I do suggest, however, to take the trail in an anti-clockwise fashion – that is, from Rifugio Auronzo heading towards Rifugio Lavaredo first). It is also the first hut that is encountered if one ascends on foot from the Sesto/Sexten side, through the Val Fiscalina/Fischleintal and Valle Campo di Dentro/Innerfeldtal.

The location of the Locatelli hut commands possibly the most spectacular view on the ‘back’ (or, more accurately, the northern side) of the Tre Cime – a sight so iconic and mesmerizing that one could just stop there and admire it for the rest of the day (see the picture at the top of the page). 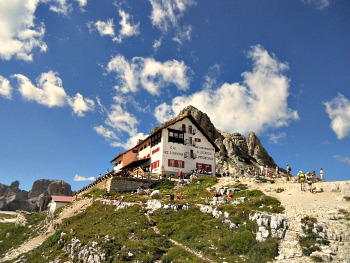 But worth noticing here are also the geological features – for instance the tiny blue interglacial lakes just behind the hut (known as Laghi dei Piani; see image below) – and the view towards the north, with the Grossglockner (3,798 m; the highest mountain in Austria) and the Tauern chain (also in Austria) visible in the distance on clear days with their extensive glaciers.

As anticipated above, the hut (and subsequent roundtrip) can also be reached via more demanding trails from Sesto/Sexten through the beautiful Val Fiscalina/Fischleintal, or from the Lago di Landro/Dürrensee (in 3 hrs) via a very narrow and steep side valley. 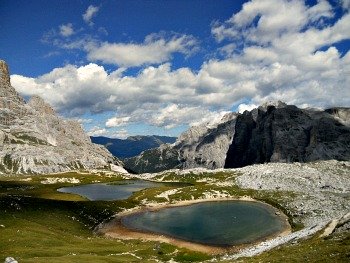 And then, of course, there is the botanical aspect. One could argue, in fact, that this mountain is almost like an open air botanical garden.

Especially if you’ve been to Monte Faverghera or the Cansiglio Botanical Garden (or any other Alpine Botanical Garden) first, you will then find along your path – ‘live’, as it were – all the flowers that were displayed there in a more ‘educational’ fashion.

Here, everything will be on a grander scale – not to mention, of course, that seeing the plants in their native habitat is a whole different experience altogether.

Being up on this mountain is like stepping into a book on Alpine flora, where all the most representative species of the Dolomites can be found and admired at once. Especially noteworthy will be the so called species of the calcareous scree – because this is Dolomite ground at its most essential.

And so, if you come at the height of the flowering season – which runs roughly from the end of June to mid-August (but this varies slightly from year to year), you will then admire – among others – the yellow Mountain Poppy (Papaver rhaeticum), the light purple of Alpine Snowbell (Soldanella alpina – in fact already visible earlier, at snowmelt), the lilac-orange blossoms of Alpine Toadflax (Linaria alpina) and the pink-flowered Rock Jasmine (Androsace alpina).

Together with these, many species of Gentians are to be seen, such as G. ciliata (first picture below), G. verna, G. clusii, G. bavarica, G. kochiana – as well as the symbol of the Alps par éxcellence, the Edelweiss (Leontopodium alpinum; second image below). 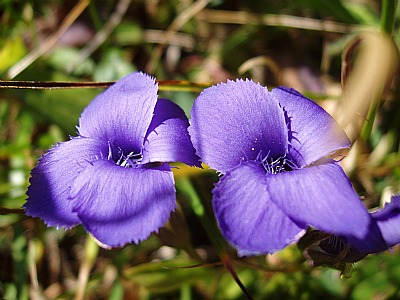 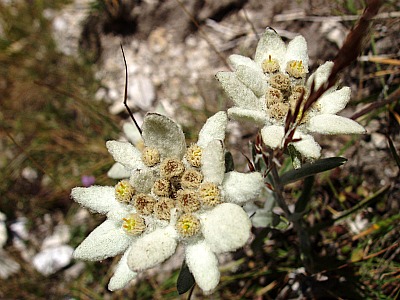 Together with the most common species – such as the ones mentioned above – there will be of course also a certain number of plants that are a lot rarer to spot, but you may just be lucky enough to be rewarded with such a sight – as I have been a few years ago, for example, when I discovered a rare blossom of Minute Primrose (Primula minima) – for my joy and that of the group that was then with me (see below). 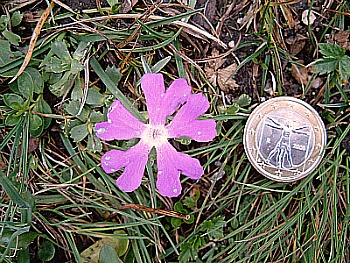 The Colours of the Tre Cime

But it is not just the colours of the flowers that are astounding – those of the mountains are amazing too.

They range the whole palette from the lunar yellow-ochre tinge which is the ‘default’ tone of Main Dolomite, to more unusual hues such as sanguine red and ochre, which are typical of iron oxides, or the dark greys of other sedimentary layers (below, for example, a beautiful image of the Croda Rossa/Hohe Geisl – that, as the Italian name of the mountain suggests, is a reddish brown; 3,146 m). 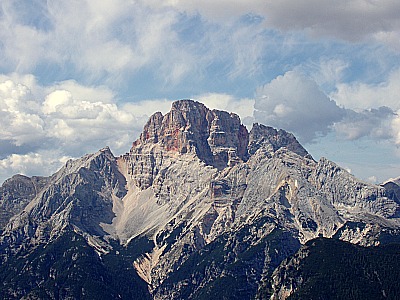 Also, the shapes are as fascinating as the colours, and sometimes walking up here gives one the impression of wandering in a primeval landscape made of prisms and dihedrals. Especially on the last section of the circular trail – that between Rifugio Locatelli and the return to Rifugio Auronzo, which is usually also the loneliest part of the walk – when looking closely to the rock faces, I often get the impression of being in front of archetypal shapes (from here, these mountains look very akin to – and almost a natural counterpart of – the Egyptian pyramids). In this section of the roundtrip, you will also encounter the Langalm – a little mountain cabin, open only during the summer season, and run by the same people who come up here to take their animals to graze. This is also, by far, the best place where to eat when doing the hike around the Tre Cime, as during the opening period, the hut offers some Tyrolean staple dishes, all locally sourced.

And then, on top of it all, there is the well-known phenomenon called enrosadira: a word describing – in the Ladin language – the literal ‘becoming pink’ of these peaks at dawn and dusk, when they glow with the most astonishing orange, pink and purple hues (as seen in the picture below, taken from near the Antorno lake at sunset). The black blotches (especially visible on the northern flank) are, instead, the marks left by extensive colonies of cyanobacteria, which affect the rock surfaces in cooler conditions. 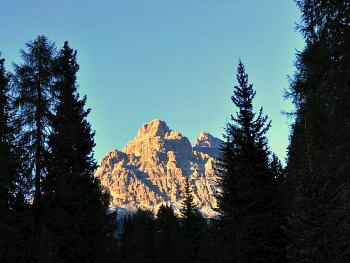 In fact, ‘reading’ the geology of the Dolomites can be quite a daunting task, as this was once an ocean floor that, during the glaciations, rose up in phases which are almost impossible to detect with just the naked eye.

The dramatic results, though, are obvious, as the colours and shapes can be enjoyed by anyone, anytime: and one does not necessarily need knowledge to experience this on a level that will feed – and appease – the senses.

And then, of course, there are the skies: these uplands are like an immense, ideal stage for yet another majestic daily drama – that provided by clouds (below, a stunning view of the Tre Cime plateau, surrounded on all sides by Dolomite peaks topped with a rare display of high lee-clouds on a late summer’s day). In fact, it is worth pointing out that September and early October are perhaps the best time of year for hiking in the Dolomites, as the weather tends to become drier and more reliable. 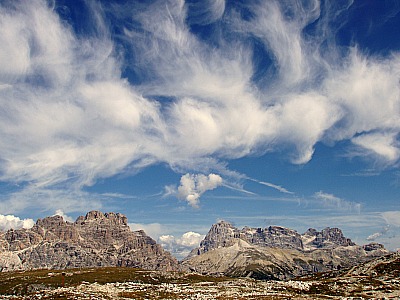 Return from Tre Cime to Dolomites

Return from Tre Cime to Italy-Tours-in-Nature