The ‘Val Falcina Nature Trail’: A Perfect Introduction to the Wild Nature of the Dolomiti Bellunesi National Park. 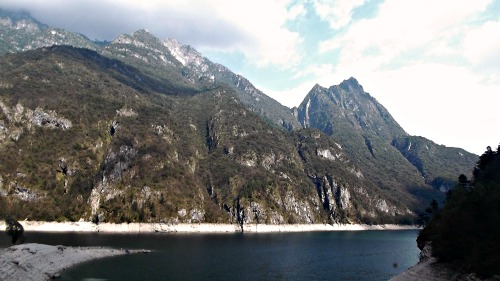 The Val Falcina is situated on the orographic right of the Valle del Mis. It is enclosed to the south-west by the Dolomite walls of Monte Pizzocco (2,176 m), and it drains into the artificial Lago del Mis (Mis lake; see above an image taken in correspondence with the outlet of the Falcina stream).

The Val Falcina Nature Trail is a short round itinerary that allows one to immerse oneself in environments characterized by a relatively high degree of wilderness, and undoubtedly of high naturalistic value too.

In order to start the trail, one has to first enter the narrow Valle del Mis from Sospirolo and the Vedana area, along which runs the twisting provincial road with several tunnels. Past some galleries, the bridge over the small Falcina stream is reached, after which is the entrance to the Val Falcina itself.

This point marks also the beginning of the Nature Trail, which is followed along its course by panels with interesting information on the geology, botany and fauna of the area, thus making this walk also an occasion for deepening the knowledge of nature in this part of the national park. Some of that information is reported below.

Observing and Understanding the Landscape

The rocks found in this area are anywhere between 220 and 100 million years old. The oldest of all is the Dolomia Principale (Main Dolomite), with the Calcari Grigi (Grey Limestone) hanging above with their thickness of about 400 metres. The very steep – almost vertical – rock layers were deeply sculpted by the Falcina torrent, which has created a typical V-scooped fluvial valley. This is a difficult valley to walk through, because the steepness of the layers has prevented the formation of those gentle slopes and ledges that have made the creation of accessible trails in other parts of the Dolomites possible. The Val Falcina was formed in correspondence with the so-called ‘Faglia del Pizzocco’ (Pizzocco fault) – a deep fault line along which one rock layer slid upon the other; the rocks along the faults were fractured and therefore more easily eroded too. Also, take a look at the wide plain that descends towards the lake and hosts the Park’s facilities: this is what geologists call an “alluvial fan” (or conoid), and it was formed by the fan-shaped distribution of the materials, flushed through by the torrent as it carved its way down the valley.

To the Invisible Boundaries of the East

Here you are at an invisible, yet important threshold: the Valle del Mis is the extreme limit of westbound distribution of many plants living in their natural state in more eastern regions. Here are many species more typical of the easternmost sector of the Alps (such as Ressmann Long-leaved Willow Flower, Knautia – or Ambretta – ressmannii) and south-eastern Europe; Black Pine (Pinus nigra), for instance (which here grows spontaneously), is generally found in the Alpine region only east of the Mis valley. At lower altitudes, in the val Falcina you will also be able to see many species typical of higher altitudes, like Dwarf Mountain Pine (Pinus mugo). On damp cliffs it is interesting, too, to observe the white flowers of the local Spiraea (Spiraea decumbens): an endemic plant that only grows in a restricted area (in this case, the mountains of Veneto and Friuli).

Chamois (Rupicapra rupicapra) descends to low altitudes in the val Falcina, especially during the winter months, arriving from the Piani Eterni and other upland areas at the heart of the Park. The woods that you will be able to cross are populated by many other animals too – especially birds: Cuckoo (Cuculus canorus), Eurasian Wren (Troglodytes troglodytes), Robin (Erithacus rubecula), Blackbird (Turdus merula), Black-cap (Sylvia atricapilla) and several species of Tit can all be spotted here. If you look up, you can even see the majestic flight of Golden Eagle (Aquila chrysaetos) that nests in the area; Bear has also been seen not far from here along the Valle del Mis. As you walk through the woods, take a closer look at the beech trunks; you may detect the nest of the ‘giant’ of the woodpecker family: Black Woodpecker (Dryocopus martius). At least one nest is visible along the trail: try and find it!

The Val Falcina is a small glacial valley – a deeply incised cut that bears the typical V-profile, carved into the rock faces of Dolomia Principale (Main Dolomite), which appears here as a powerful succession of layers with very inclined banks – almost vertical at times.

In fact, in some areas the rock walls form small canyons (for example, in the Valle del Burt). The geo-morphological development and profile of the valley was also strongly affected by the presence of an important fault-line (the so-called “Faglia del Pizzocco”), which is responsible for the intense fracturing of rocks.

At the exit of the Val Falcina, along the Valle del Mis, is a wide area – almost flat and gently sloping towards the lake (“Pian della Falcina”) – that corresponds to a big, stabilized alluvial fan (or conoid), partly eroded and incised along its southern edge. Today, this open field is mainly used as a tranquil little beach.

For its botanic and vegetation peculiarities, this itinerary can be considered representative of the floral landscapes present – especially at middle altitudes – in the eastern territory of the park.

This area is especially important for the presence of floristic entities that are more typical of eastern Europe: Black pine (Pinus nigra), Ambretta ressmannii, Carnian Bellflower (Campanula carnica), Kerner’s Spurge (Euphorbia kerneri), some of which find here their westernmost stations within their area of distribution.

The types of forest vegetation that are most frequently found along the trail are sub-montane Beech wood mixed with Hop Hornbeam (Ostrya carpinifolia), and straggly formations of Austrian Black Pine (Pinus nigra), which generally colonize the driest slopes. To be mentioned, also, is the typical vegetation of wet rocks, dominated by the local endemic species Spiraea decumbens ssp. cuneata together with Alpine Cinquefoil (Potentilla caulescens) and Devil's Claw (Physoplexis comosa).

Most of this itinerary crosses broad-leaved deciduous woodland habitats, which offer shelter to many animal species – especially birds. In this respect, the area differs quite significantly from other sections of the park, as here several animals – such as Chamois (Rupicapra rupicapra) – are relatively easy to spot.

Paying some extra attention can reap its rewards: for instance, hearing or seeing interesting animal species that are usually quite elusive – sometimes even rare. Among these, certainly to be mentioned are Golden Eagle (Aquila chrysaetos), Great Spotted Woodpecker (Dendrocopos major), Viper and Fox.

The presence of the lake also contributes to increase the diversity of fauna within the area. Numerous species are quite widespread by the lake shores, such as Common Toad (Bufo bufo) and Alpine Frog (Litoria verreauxii subsp.), which also reproduce here, as well as European Grass Snake (Natrix natrix) and, among the birds, Barn Swallow (Hirundo rustica, which nests on the Val Falcina bridge), Common Merganser (Mergus merganser) and Western Yellow Wagtail (Motacilla flava).