The Castle of Dozza is Immersed in Gently Rolling Hills Renowned for their Wine Production. 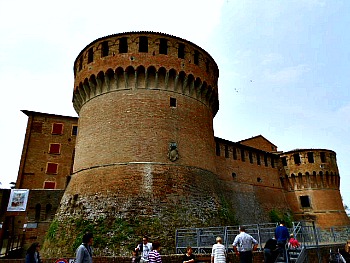 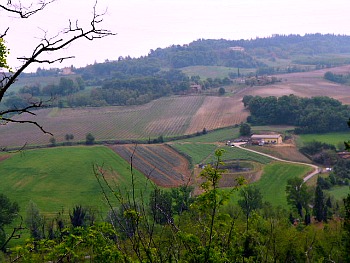 The pleasant hilltop town of Dozza is an ancient village of historic and environmental interest, immersed in a gentle landscape of rolling hills which are renowned for their wine production, in a region already famous for its good food. Apparently, the quality of the wine – especially the Albana, a dry white wine – is linked to the characteristics of the geologic substrate of the hills surrounding this small town (the so-called sabbie gialle, which would roughly translate as yellow sands into English).

Apart from this, the town is known mostly for two reasons: the ancient fortress or castle (Rocca in Italian; pictured above), which is its main monument, and the unusual outdoor frescoes painted along the streets, which earned the village the title of Paese del Muro Dipinto (“The Town with Frescoed Walls”). This is the result of a long-standing competition which is being held every other year since the 1960s, when this initiative was launched in order to boost the potential of the village, given its already valuable location. The competition is sometimes won by quite famous painters.

Overall, Dozza is in fact a classic example of a Medieval castellated small town, which was preserved intact in its general structure and within its original perimeter (below, is an image of the natural setting in which the village is located, with gently rolling hills mostly covered in vineyards).

The Fortress and the Lords of the Castle

The fortress of Dozza is quite a complex building that, since the 13th century – when it was built – underwent several changes, aimed at enlarging and adapting it to new functions. These changes can be referred to three main phases, and for each one of them a visitors' route linking rooms with similar uses and stylistic features was devised.

The first phase corresponds to the Medieval and Renaissance fortress. It deals with the castellated and defensive systems and includes 13th-15th century architectural remains, from the Medieval layout up to the changes brought about by the Riario-Sforza family, when the building was still mainly intended for defense purposes.

The second phase refers to the Renaissance period, in which the Counts Campeggi provided the fortress with the functionality and architectonic symmetry that is typical of 16th-17th century buildings, eventually converting it into a fortified residence.

The third phase corresponds to the rooms that were either modified or built when the fortress was owned by the Malvezzi-Campeggi family, between the 18th and 19th century. These changes turned the building into a nobleman’s residence until 1960. Here is a succinct history of the castle, followed by more information on its visit.

History of the Castle

The Middle Ages. Dozza has been identified as a castrum (fortified settlement) ever since 1126. During the Middle Ages – being strategically positioned on the border between Bologna and Romagna – the hamlet was fought over by Bologna and Imola, by Guelphs and Ghibellines, by Romagna’s various lordships and by the Roman Church. In the 14th century, some historical documents mention the Bolognese supremacy, then the rule by the lord of Romagna Ricciardo Manfredi, the Papal legate Cardinal Egidio Albornoz and later on the Bentivoglio family, which marked the return under Bologna's control.

In the early 15th century the castle was seized by a famous mercenary captain, Alberico da Barbiano; then it fell under the domination of the Alidosi and Manfredi families, lords of Imola. During these centuries the fortress certainly underwent many changes, demolitions and reconstructions, although there is little historical evidence about the building works. It is reported that in 1310 Romeo Pepoli commissioned Arpino di Cantagallo and Bernardo di Montecatone with significant repairs of the building; other reinforcement works were carried out in 1317, 1322 and 1324 – but unfortunately no descriptions or layouts of the ancient castle are available anymore (below, an image of the Rocca from a different angle). 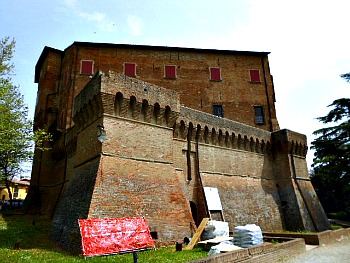 The Early Renaissance Period. In the last decades of the 15th century the fortress’ history blended with that of the Riario-Sforza lordship. In 1473, a marriage with a strong political meaning was celebrated between Girolamo Riario – nephew of Pope Sixtus IV – and Caterina Sforza, daughter of the Duke of Milan and niece of Ludovico il Moro. Girolamo received from his uncle the vicariate of Imola, which was already under the Sforza family domination. In 1480 he also became lord of Forlì and equipped all the castles of his State – including many smaller possessions, such as Dozza – with a remarkable set of defenses.

In Dozza these works started in 1480 and it is likely that they were designed by a military engineer, Gian Ludovico Menghi, and carried out by Florentine builders, who were very active in the area. In 1488 Girolamo Riario was killed by a conspiracy, and Caterina Sforza succeeded him as the regent of her eldest son, Ottaviano; Caterina continued the defensive works started by Girolamo. The reinforcements started in 1494 allowed this small fortress to resist for more than one month the repeated attacks launched by the Valentino, son of the new Pope Alexander VI Borgia, who was soon to become Duke of Romagna.

The Late Renaissance Period. In the early 16th century the cities of Romagna came back under the direct control of the Holy State ('Stato della Chiesa'). In this period two important Bolognese senatorial families – the Malvezzi and the Campeggi – came on the scene, holding alternatively the ownership of the fortress for more than four centuries. In 1528 the Counts Ercole II and Pirro II Malvezzi were the owners of Dozza’s feudal estate, but they were replaced in just a few months by the Campeggi family, who became effectively the true Lords of the castle during the late Renaissance period.

Cardinal Lorenzo Campeggi – a renowned diplomat who also served Pope Julius II and Clement VII – lent large amounts of money to the Apostolic Camera. Thanks to these credits, in 1529 he was granted the feudal estate of Dozza. After the death of Cardinal Lorenzo (1539) and of his son Rodolfo (1547), the castle was rejoined to Imola’s territory in 1562 – the year in which the Campeggi family were definitively invested with the county of Dozza, which was then raised to Marquesate in 1629. Meanwhile, between 1565 and 1594 the Counts Vincenzo, Annibale and Baldassarre started extensive renovation works to turn the fortress into a seat of feudal representation.

From the 1700s to Modern Times. In 1728, after the death of Lorenzo Campeggi – the last male of the family – the Marquesate of Dozza was inherited by Francesca Maria Campeggi, Matteo Malvezzi’s wife, who transferred the feudal rights to her husband’s family. Francesca’s son, Emilio, was the first marquis to bear the unified name of Malvezzi-Campeggi. In 1798, when the Napoleonic laws were enforced, the fortress was on the verge of being confiscated but the marquis Giacomo managed to demonstrate that the castle was a private asset.

The feudal estate of Dozza was abolished but the fortress remained property of the Malvezzi-Campeggi family, who inhabited it until 1960. They started several maintenance and renovation works on the building, aimed at adjusting it to their changing needs. These included the construction of the second floor apartments, which are now mainly used as exhibition spaces. After the death of Giacomo Malvezzi-Campeggi – who lived in the castle until 1955 – his heirs decided to sell the building to the municipality of Dozza, which opened it up to the public in 1960 (below, another image of the Rocca, with the covered walkways that were obtained beside and above the area previously occupied by the apartments). 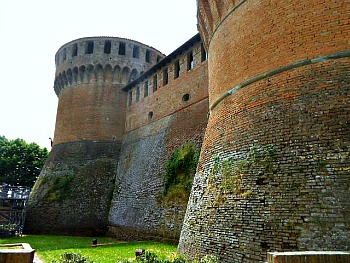 Visit of the Castle

Apart from its history, a visit to the Rocca is a very pleasant experience in its own right. The visit is articulated on three floors. The building is accessed via a drawbridge; at ground level there are the kitchens and the prisons, displayed around a central courtyard; one flight of stairs then leads to an elegant loggia in Renaissance style (portrayed in the image below), which is the way in into the first set of decorated rooms that can be entered in sequence, in a circular fashion.

The room arrangement on the first floor mostly dates back to the time of the Campeggi lordship. At that stage, the courtyard between the two towers was partly covered to extend the residential space both on the ground floor and on the first floor. The construction of a double loggia with sandstone columns not only enhanced the architectonic style of the residence, but also complemented the central courtyard, which by then had become the hub of the activities taking place inside the building. 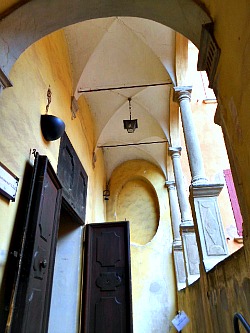 The second floor, once occupied by the apartments, provides spaces which are now mostly being used for exhibition purposes; from there one can climb to what today is the most atmospheric section of the building: the covered spaces that have been obtained under the towers and the walkways connecting them (these are pictured below).

The imposing towers are undoubtedly the highlight of a visit to the Rocca: they are marked by string-courses and incorporated within a continuous system of polygonal corner elements with blunt edges that characterise the rampart-type of tower invented by Giuliano and Antonio di Sangallo.

The accurate inventory of 1795 describes a residence in which by now all the enlargements made reflect the development and enhancement of the residential parts (as defense purposes were clearly outdated at that stage). It was at that point that the communication trenches and the uppermost floor with the two towers – which were once part of a surveillance system that had revolved around the so-called “Lord-of-the-Castle Apartments” on the second floor – were covered and turned into intimate passageways.

Today this location still commands the most enjoyable views over the town and its geographical setting – especially the gentle hills that encircle it all around, as if to hold Dozza in a soft embrace (see for instance the picture below). 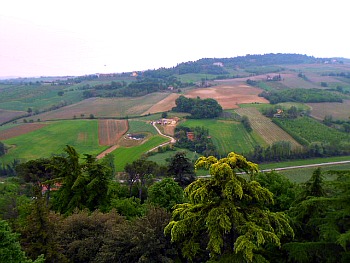 In the subterranean part of the building is hosted the Enoteca Regionale: a public structure for the valorisation of the wines produced in Emilia-Romagna, which are all available here for sale and for tastings (there is also a wine bar).

As anticipated above, Dozza is famous also for the frescoes along its streets, which are in the most diverse styles. In some cases, the effect is quite surreal; almost psychedelic – as it can be appreciated in the picture below! 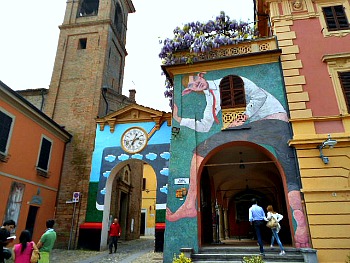 Walks, Hikes and Nature in the Area

In terms of nature, there is a small Natural Regional Reserve in the area, the Bosco della Frattona (19 ha); it is a patch of relic woodland in the vicinity of town, towards Imola – a spot particularly favoured in spring for the blossoming of snowdrops. Otherwise, the Santerno valley provides various possibilities for more organized walks and hikes – especially in the area of the Vena del Gesso, which is just a short drive from Dozza.

The “Wines and Flavours Route of the Colli di Imola”

The area covered by this “Wines and Flavours Route” includes the easternmost valleys of the Bologna Apennines where ‘Lombard’ Emilia and ‘Byzantine’ Romagna meet. It is an area rich in harsh natural beauty, characterized by strata (layers) of chalk. The winemaking tradition of the Colli di Imola is particularly noteworthy for the production of Albana and Sangiovese, while the gastronomy is no less notable: from the celebrated Piadina (a simple but tasty flatbread – a real staple in the cuisine of Romagna) to cheeses; from the traditional mutton and polenta dishes (central to the Shrove Tuesday celebrations in the town of Tossignano) to the ‘Marroni di Castel del Rio’ – a particular type of chestnut exclusive to the area – the choice is really endless.

Return from Dozza to Emilia-Romagna

Return from Dozza to Italy-Tours-in-Nature