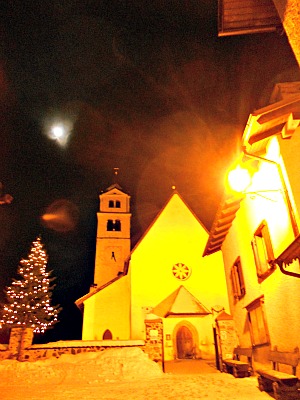 With the term Ladinia is generally indicated – albeit with a variety of different meanings and characterizations – the Alpine region where the Ladin language is being spoken historically, which lies at the heart of the Dolomites. It is thus mainly a cultural region, to which no unique administrative entity corresponds entirely – neither now nor in the past – and no precise geographic boundaries either (in the picture above, an image of Colle Santa Lucia by night).

Among the most prevailing definitions – apart from the ‘natural’ one that identifies Ladinia with the entirety of the territory in which the Ladin language is being spoken – also quite widespread is the notion which equates the region with the sole portion of territory that prior to 1918 belonged to the Austro-Hungarian Empire; this acceptation is particularly reclaimed by some cultural institutions and local movements.

The so-called ‘Rhaetian-Roman’ populations around year 1000 were occupying quite an extensive area in the Central-eastern Alps, which extended from Switzerland (the Cantons Gräubunden and Ticino) all the way to the Julian Alps (in Friuli) and present-day Slovenia.

The Ladin that was spoken then by the most central groups belonging to these populations was derived from the latinised idiom spoken by the indigenous people of Celtic, Rhaetian or Roman origin, which from the 5th century may have received further Latin contributions from Rhaetia, the Noricum and Pannonia, because of the emigrations caused by the invasions of the German people of the Bajuvars and Rugii, as well as those of the Avars and the Slavs.

Subsequently, the speakers of these Neo-Latin varieties were indicated by the Germans as Welsch, as a way of differentiating between them and the Windisch – the Slavs – while at the same time these populations defined themselves as ‘Latin’, from which later derived the dialect variant ‘Ladin’. This latter term became widespread only after the 18th century – even within the German-speaking world – to designate those peoples undergoing a process of ‘germanization’, while at the same time still belonging to Tyrol, so that history, geography and linguistics got inextricably entangled.

According to the 'purists', today would belong to the Ladinia only those municipalities where the Ladin language is still spoken in the Val di Fassa (Trentino), Val Badia/Gadertal and Val Gardena/Grödnertal (South Tyrol), as well as in the Upper Val Cordevole (Livinallongo and Colle Santa Lucia; see an image of Colle below) and Cortina d’Ampezzo: all of these are ex-Hapsburg territories – but according to some acceptations, one should also add on to these all the other Ladin municipalities officially recognized as linguistic minorities by the national law situated in the province of Belluno (which include Cadore and Comelico).

As a matter of fact, each of the five so-called ‘Ladin’ valleys has its own language variant being spoken, as well as its cultural institutions, often also displaying museums which can be of great interest to the tourist or the visitor. The 'central' and most outstanding of such museums is by far the Museo Ladino (Ladin Museum) in Castel de Tor, in the Val Badia/Gadertal, but there are also minor Ladin museums in the Val di Fassa, Livinallongo, Colle Santa Lucia and another cultural institution (with no museum attached as such) in Cortina d’Ampezzo, even though they look after the so-called Museo delle Regole, which comprises an art gallery, an ethnographic collection and the paleonthological museum dedicated to memory of Rinaldo Zardini. 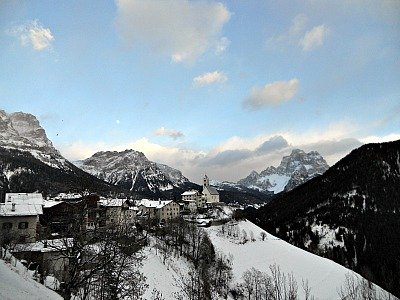 To recap, the area takes its name from its inhabitants – the Ladins: a mountain population that speaks in its majority the Ladin idiom, which belongs to the ‘Rhaetian-Roman’ group of Neo-Latin languages. According to the advocates of Ladinia as an exclusively ex-Hapsburg territory, then, it is not correct to identify as ‘Ladin’ the language of a territory that has not been conquered by the Austro-Hungarian Empire with the end of WW1, in spite of numerous linguistic evidence to the contrary.

In any case, according to this opinion movement, it is not Ladin in linguistic terms to qualify Ladinia as such, but rather the historic circumstance of annexation to Italy following WW1 of these territories; thus, the thesis that the so-defined Ladinia be the only area characterised by a ‘true’ Ladin language is strongly opposed by the Ladin cultural institutions of the province of Belluno, as this theory does not find any correspondence in the actual laws and official acts of the Italian state.

The goal here, however, is not to enter the intricacies of this debate, but just to point out that there definitely is a hardcore area within the Dolomites’ region that can be told apart by both its linguistic and cultural peculiarities, and which we will call Ladinia without taking a position on which areas belong to it by right or not. This, in my view, adds an extra layer of historical richness to those territories – which is reflected in the culture, architecture and traditions – and can represent an additional motive of interest for the most attentive and motivated of visitors.

The territory of Ladinia develops for about 1,200 square km and is occupied entirely by the Dolomites; almost at its centre is the imposing Sella massif, from which radiate in all directions the so-called five Ladin valleys (in brackets is given their Ladin name): Val di Fassa (Fascia) in Trentino; Val Gardena/Grödnertal (Gherdëina) and Val Badia/Gadertal (Gran Ega) in South Tyrol; Livinallongo (Fodom) and Ampezzo (Anpezo) are in the province of Belluno.

From an administrative point of view, also, the Ladinia is split between three provinces and two regions: Bolzano (South Tyrol) and Trento (Trentino), forming the Trentino-Alto Adige/Südtirol region, and Belluno, in the Veneto; its various municipalities are mostly of small dimensions – apart from Cortina and Ortisei/St. Ulrik, which are bigger towns.

The rivers of Ladinia are in fact mostly streams. The Avisio springs from the glacier of the Marmolada and crosses the whole of the Val di Fassa; it is certainly – in terms of length and flow rate – the most important water course in this small region. It is 89 km long, and after forming the Val di Fassa it continues into the Val di Fiemme and the Val di Cembra, finally flowing into the Adige at Lavìs, just north of Trento.

Another important stream is the Cordevole, whose source is in the vicinity of Passo Pordoi (2,239 m), in the municipality of Livinallongo del Col di Lana. It is 79 km long, and after having crossed the whole of the Agordino region, it flows into the Piave at Mel, near Belluno. It is the Piave’s most important tributary.

The Boite is the stream of Cortina d’Ampezzo; it originates at Campo Croce, then it crosses the centre of Cortina itself and the “Conca d'Ampezzo”, until its confluence – after 45 km, all along the Boite valley – into the Piave at Perarolo. It is the second most important tributary of the Piave after the Cordevole.

More modest are the streams situated in South Tyrol: the Gadera/Gaderbach stream has its springs by the Passo di Campolongo (1,875 m) and crosses the whole of the Val Badia; after 35 km it joins the Rienza/Rienz at San Lorenzo di Sebato, in the Val Pusteria/Pustertal. Even more modest is the Rio Gardena/Grödnerbach, which originates by the Passo Sella (2,240 m), crosses the important valley with the same name as the stream, and after just 26 km joins the Isarco/Eisack at Ponte Gardena/Weidbruck. 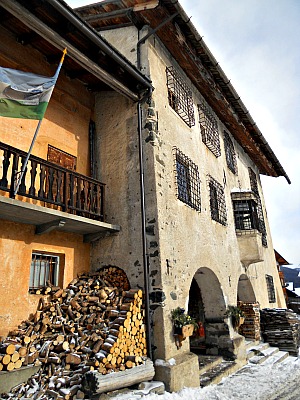 The flag of the Ladins of the Dolomites was born as late as 1920. At the time, representatives of the five Ladin valleys gathered at Passo Gardena/Grödnerjoch to protest against the decisions of the Treaty of Saint-Germain, which did not recognize neither Ladin people – nor the German populations of South Tyrol – the right to auto-determination (one of Woodrow Wilson’s fourteen points). The additional request was the recognition of a distinct ethnic group.

In this occasion, the flag with horizontal bands (blue-white-green) appeared for the first time. These colours were chosen to symbolize the nature of the Dolomites:  the green of the meadows and of the spruce forests, the white of the snow that covers the peaks, and the light blue of the sky (in the picture above, the green-white-blue Ladin flag is unfurled by the Ladin Cultural Institute at Colle Santa Lucia).

At the end of that demonstration, this was declared as the “official flag” of the Ladins (and of Ladinia), but during the Fascist period the flag was (not surprisingly) made illegal by the dictatorial regime; however, the flag soon reappeared at the end of the conflict – in July 1946 – on Passo Sella, in the occasion of a new manifestation at which 3,000 Ladins took part.

Learn more about the culture of the Ladin people by consulting the page on the so-called ‘Culturonda Dolomythos’: an initiative that has been devised by the province of Bolzano (South Tyrol), divided into twelve thematic areas, and whose aim is to propose alternative ways with which to explore the culture of the Dolomites (one of these itineraries is dedicated precisely to the Ladin culture).

Return from  Ladinia to Dolomites