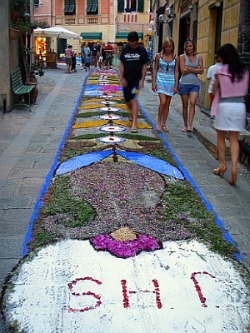 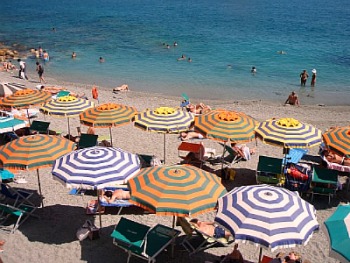 Monterosso is the biggest centre of the Cinque Terre. It is also the westernmost of the “five lands” – so the furthest away, if you arrive from La Spezia (bearing in mind that the villages are all quite close to one another – at least when travelling by train; walking is another matter altogether, but we’ll get there in a minute).

Monterosso has the appearance of an attractive small town, divided into two different sections, Fegina and Centro, by a rocky outcrop. If you arrive by train, the stop is in Fegina, which is the more modern borough that started its development only in the early 1900s, with the arrival of the railway line and thanks to the presence of an extensive, beautiful beach that is still one of the most frequented of the whole area. Its central section, with umbrellas and chairs, may be used for a fee, but the fringes are free – a pebbly section to the west (the furthest, coming from Monterosso), and a rocky one at the other end, close to the pedestrian tunnel that connects Fegina to Monterosso Centro. The accessibility of its beaches – and their relative vastness, when compared with the Cinque Terre standards – is in fact what turned Monterosso into a resort in the first place, still to this day teeming with holiday makers in the summer (above, a view of the beach at Fegina).

But the beaches, beautiful as they are, are only one aspect of Monterosso – and in fact, many people flock here for different reasons altogether. The Cinque Terre are a unique environment in their own right, so most visitors come for a combination of activities that include walking along the superb coastal path (more on this in a moment) and taking in the beauty of the villages, while immersed in a setting that puts together harmoniously the human and natural worlds, and that will please the senses on so many levels (the culinary delights – as well as the visual ones – certainly play a vital role in this).

Let’s now start our visit with the centre of Monterosso. Its compact, Medieval appearance is quintessentially Ligurian, but its flat location sets it apart from the other villages of the Cinque Terre, clustered as they are around small coves on more uneven ground. Monterosso Centro has a lively atmosphere, with the bustle of many shops and restaurants, but retains also also a few highlights such as the main church, dedicated to San Giovanni Battista (St. John the Baptist), with a façade built in the typically Ligurian gothic style, alternating strips of white marble with dark gray slate. In the same tiny square, incorporated in a more modern house, are visible the remains of a Medieval building, while beside the main church is a small Oratorio, with interesting but rather sombre wood carvings in the interior, representing the theme of the Danse macabre (or “Dance of Death” – please note, these were removed for restoration as of September 2010. Pictured below, the church of San Giovanni Battista). 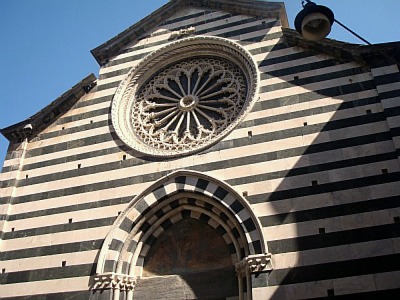 The stony outcrop that dominates the village, apart from commanding beautiful views, also offers an interesting building to visit, the Convent of the Cappuccini, plus traces of the defence system. Constituted of ruined walls and the Torre Aurora, these are the sole remnants of the fortified castle – and a stark remainder of the distant times when protection from pirate invasion was a necessity.

Monterosso is also the starting point of the coastal path (known as “Sentiero Azzurro”) that will take you all the way to Riomaggiore with about 6/7 hours of steady walk. Unless you’re a very fit hiker – and/or in a big rush – though, I warmly discourage you from walking the whole length in one go; not so much because of the rise, but first and foremost because this is an experience to savour slowly, and in my view, doing it too quickly would somehow ‘burn’ it. My best advice is to spread the walk over a minimum of two days – three even better, if you can. Also, my final piece of advice is to avoid the hottest months; this walk is really at its best in spring (from April to mid-June), and then again in early autumn (mid-September to late October). From mid-June to mid-September it can be almost unbearably hot, even though of course you can always pick some good days to walk even in the middle of summer, depending on the wind direction, cloud cover and – especially – the degree of humidity.

On that note, it is worth pointing out that the microclimate of the Cinque Terre is such, that with the dominant south-westerly breezes mornings tend to be cloudy or hazy, bringing lots of humidity from the sea (a phenomenon known in Liguria as ‘maccaja’, and not so dissimilar to what happens on the US Western seaboard), but mid-morning usually sees an improvement, and it is usually fine by the afternoon. Northerly winds bring clear and dry, but often windy, weather – possibly the best for walking, even though it can be distinctly chilly in winter (this wind, known as Tramontana in Italian, gains speed as it descends the Appennines – so it can become quite gusty as it reaches the coast, making also the sea rough).

Bearing all this in mind, we can venture on to the first stretch of the walk, which is moderately long, and that will take you to Vernazza in about 1 and a half to 2 hours (depending on how fast you go). The first section is decidedly uphill, often along steep stairs that are almost carved in between the historical stone walls that form the ancient terraces – by far the most definite and dominant feature of the Cinque Terre (below, a view looking back towards Monterosso, with Punta Mesco in the distance). 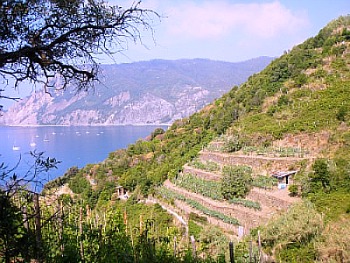 This is a human landscape that took a millennium to form, when man originally felled the woods which covered the mountain slopes around 1000AD, with the subsequent creation of terraces contained by dry stone walls, on to which vineyards were planted. The interaction between man and nature has been continuous since then, and has led to the progressive shaping up of a unique landscape in which natural features and human intervention are wedlocked together.

Intensive labour was the only way to make productive an area which otherwise was not possible to cultivate, and this, incidentally, also gave it hydro-geological stability. Nowadays, the maintenance of the territory and the defense of its defining features – above all, the many kilometres of dry stone walls – are entrusted to the operations linked with the cultivation of the vineyards; in fact, degradation would immediately follow the abandonment of these places by man. Indeed, it was in order to safeguard the uniqueness of this historical working landscape – recognized as a World Heritage Site by UNESCO – that the creation of a National Park was deemed a necessary act.

The presence of the Park can now be detected in many ways – the most obvious being a Visitor Centre in every village and, of course, the small fee that you have to pay in order to walk along the “Sentiero Azzurro”, with several options ranging from the one-day to the weekly ticket (probably the two- and three-days options are the most popular; there is also the possibility of buying a combined walk and rail ticket – a good deal if you plan to move a lot in between the villages).

There are different, contrasting views around the idea of a having to buy a ticket in order to do the most popular walk (all the other paths are free), but the responsibility of maintaining a living monument such as the Cinque Terre takes its toll, and so this must be seen in the context of one of the many actions undertaken by the park (such as the manufacturing and sale of natural and typical products; for more on this, see the Riomaggiore and Vernazza pages) in order to preserve this world treasure for posterity.

But finally, after this long digression we come back to our trail, and we have now started our descent: all of a sudden, Vernazza appears almost like a magical vision: a cluster of multi-coloured houses, sitting tight together around a small cove, with the church to one side, and the caste jetting towards the sea on the other. The path then slowly meanders its way down among olive groves, and as it gets closer to the village, the vegetation becomes more lush, with Citrus plants, orchards, and – in late autumn and during the winter months – the sweet, embalming scent of the Japanese Medlar or Loquat (Eryobotrya japonica): an exotic introduction so widely naturalized that most gardens and groves now have at least one specimen (below, a view of Vernazza from the Sentiero Azzurro). 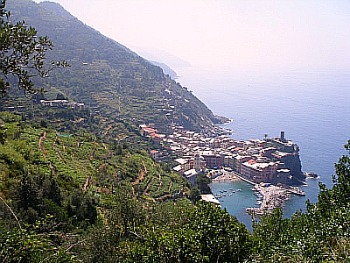 Return from Monterosso to Cinque Terre

Return from Monterosso to Italy-Tours-in-Nature