Vernazza in the Cinque Terre – a Perfect Blend of Nature and Culture. 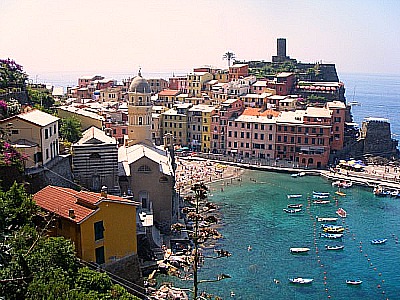 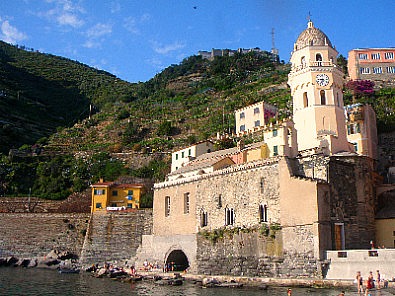 Vernazza is a truly beautiful place, and – at least in my view – it is perhaps the nicest village of the Cinque Terre. It lies tucked away in a deeply cut gorge that opens up in a small cove, protected on all sides by steep mountains; in front of it, only the vastness of the sea.

The isolation in which this place must have lived for centuries is evident when you try to approach it by road – something that I would not advise you to do. Equally, it is difficult to imagine today the revolution that must have represented the arrival of the railway, which connects Vernazza to Monterosso in just five minutes, and to the major city of La Spezia – the provincial capital – in fifteen: something that we take for granted now, but that must have seemed unimaginable once.

Having said that, what is it that makes Vernazza so unique? If I had to sum it up in one word, I would definitely say: location. It is enchanting to reach the village from the coastal path – especially if arriving from Monterosso – and see the multi-coloured cluster of tall houses around the small harbour getting nearer and nearer (see the first image above). This is also because, perhaps, even from afar one sees the church and the castle, and naturally starts fantasizing about how to reach them (in the second picture above, an image of the church).

When one finally reaches Vernazza, the central spine of the village is a wide street running above a covered stream, where most of the shops are, while on either side (as can perhaps be expected) is a maze of narrow alleyways known in Ligurian dialect as carruggi – but the village being so small, it is quite impossible to lose oneself.

The central square – if it can be called such – opens on to the harbour, and many of the houses there incorporate traces of previous medieval buildings; if you go to one side, in a few steps you will reach the church of Santa Margherita, which still bears the traces of its Roman foundation. Allow some time to take in this quiet space, whose most striking feature, I find, is the fact that the mullioned windows of the interior directly frame the open sea.

Go to the other side instead, and you will see a square turret in front of you – its terraces hosting perhaps the best fish restaurant in Vernazza. Now, if you retreat a few steps, and let your intuition guide you up the alleyways, they will lead you to the ruins of the old castle. Even though not much remains of the original building apart from a round tower and some sections of the wall, from there you will possibly enjoy the best view on the whole Cinque Terre area.

The sights are amazing; from there, Vernazza looks like an open air amphitheatre: a mosaic of houses that only the patience of men could build with such precision over many centuries – and there aren’t even many modern buildings to spoil it (in fact, hardly any – which is quite a rare fact in Italy). Look a bit further, and you will be entranced by the minute pattern of dry stone walls that cover the lower sections of the mountainsides: another intricate work of art that only time and patience could create. And then notice how the two fit together in a perfect match: I don’t think I could find a better image than this to convey the sense of interaction and harmonious integration between man and nature which lies at the very heart of the Cinque Terre, and that makes this region so unique – not just in Italy, but in the world. And then, of course, the views on the sea are not less fascinating (below, an image of Vernazza from the castle). 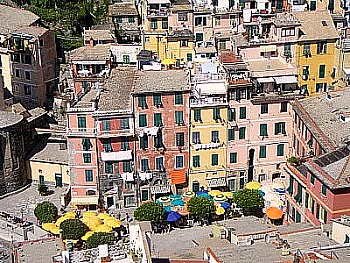 But however beautiful Vernazza can be, there comes a time to leave it, and to resume our walk along the coastal path – the “Sentiero Azzurro” – that will take us onwards to Corniglia. Comparatively speaking, this is perhaps the most strenuous section of the coastal path – so it is generally a good idea to face it first thing in the morning, especially in the hot season. At the beginning it rises steadily, often with traits of stairs cut in between the stone walls; a flatter section then follows, through olive groves. For the most adventurous, after the few isolated houses of Prevo, there is the possibility of taking a diversion: a path down to the beach of Guvano. This is perhaps the best beach in the Cinque Terre – if anything, because it is so difficult to reach that there is a ‘natural’ selection, and so it is very rarely overcrowded. It is also so secluded that it is particularly appreciated by those who wish to practice naturism (below, looking ahead of Vernazza from the coastal path). 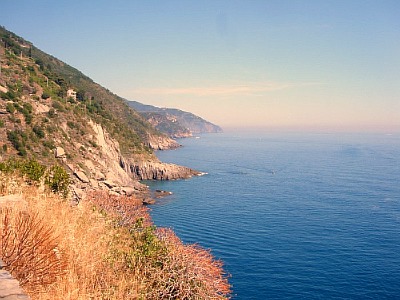 Reaching this beautiful spot certainly reaps its rewards, but a word of warning: the descent is not only steep, but it can also be a real scramble in between overgrown brambles, thick clumps of canes, and all sorts of other leaning branches, as it is not part of the ‘official’ path network, and therefore it is not maintained on a regular basis – so that the contrast with the neatness of the coastal path can be quite striking, and come as a surprise. So, take your precautions, but don’t be discouraged: if you’re reasonably fit, and not afraid of a few scratches, this detour is all worth the while.

Going back to the main path now, it is not a long distance from here to get to Corniglia. This level section amid olive groves continues pleasantly, and there isn’t really a descent, as Corniglia is the only village of the Cinque Terre not to be built along the coastline, but perched up high on a hill. Despite that, it is still a worthwhile stop, as Corniglia displays perhaps the most interesting church of the whole Cinque Terre – a Roman-gothic building strangely without the typically Ligurian two-colour striped black and white pattern. The rose has a particularly delicate design, and it’s just a shame that the fine interior is, more often than not, closed (if you’re really keen to visit it, time your walk to synchronize it with a Sunday service – but check times first, as these also vary). In the tiny, pleasant square, remains of an old Medieval building can be seen incorporated in the house in front of the church (below, an image of Corniglia church). 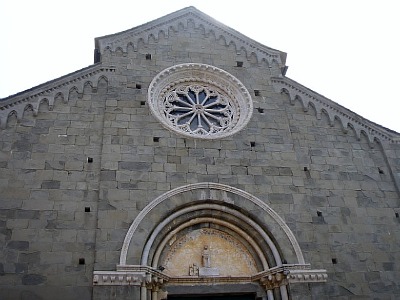 It is then pleasant to stroll through the alleyways in Corniglia; quaint, tiny squares open from time to time, always with something to offer: the shade of old plane trees, small gelaterie and restaurants, fascinating views – or simply a poetic sense of emptiness that would have perhaps inspired a Metaphysic painter such as Giorgio De Chirico. One spot is particularly renowned: the terrace that opens up at the very end of the village’s main street, with the finest view in Corniglia. But again, as in Vernazza, the best is to just wander and let your intuition guide you, as the village is quite small (below, a picture of the church square in Corniglia). 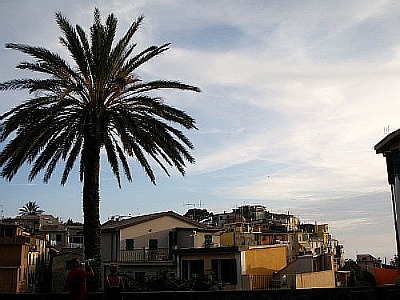 The section of the coastal path continuing from Corniglia – in its first part, at least – is perhaps the least attractive of the whole “Sentiero Azzurro”: first, there is a steep descent to sea level, along a flight of zigzagging stairs in a setting which is not particularly ‘natural’; then, past Corniglia railway station, there is a shabby part alongside abandoned beach huts, with several openings on to the so-called “Spiaggione di Corniglia” – Corniglia’s “big beach”.

In fact, this is the longest stretch of beach in the whole Cinque Terre, again not very frequented, as it is pebbly and has no facilities nearby (the location just under the railway, perhaps, not adding much to the charm either). Having said that, it is not an unpleasant spot, and I see it more as more 'functional' rather than a place to reach in its own right (such as the Spiaggia di Guvano mentioned above, for example).

By that, I mean that it is a beach where it’s fine to just stop for a quick bath and a relaxing hour in the sun while walking on the path – as it’s so handy! After the ‘spiaggione’, the path rises again, but only slightly, and the interest grows: there are fine views looking back towards Corniglia, and a small rocky cove (at about 2/3 of the way to Manarola) with azure, crystalline waters, where it is particularly nice to stop for a dive. After this cove, Manarola is literally only a few minutes away, and once past the promontory, a beautiful sight will open up on its small harbour, around which the old houses are clustered (in the image below, stormclouds over the sea at Manarola). 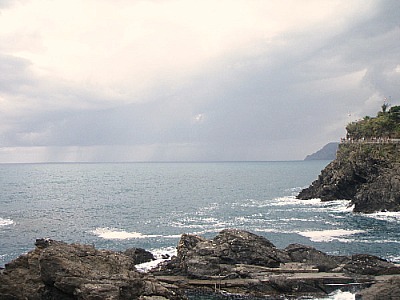 The other thing to bear in mind, from Corniglia and Manarola alike, is that there is not only the ‘classic’ coastal path to follow, but also an opportunity, from both towns, to go up: the village of Volastra could be considered the ‘sixth’ of the Cinque Terre (if such a thing could exist!), and it is quite a steep walk if you decide to reach it on foot (otherwise, there is also the option of taking a bus).

Volastra is the hub of olive oil and wine production in the whole Cinque Terre – one could say it’s its “working heart”, away from the hustle and bustle of tourism, and the “beautiful bedlam” of the coastal villages. If you’re really keen on this aspect, you may visit the Corniolo hill-farm, not far from Volastra itself: it is an emblematic example of hilltop terraces that were once abandoned; after reconversion to productive land thanks to the park’s initiative, they have been devoted to organic agriculture and sustainable production. Old, traditional methods of tending the land have been reinstated here, and all the cycles of work are carried out with passion and a sense of dedication; a lot of the fruit and vegetables used for the local products sold by the park are produced here – not just olives and grapes, but also basil, herbs, lemons and sweet peppers: all the gifts of a Mediterranean climate and a generous sun (below, an image of the vineyards around Volastra). 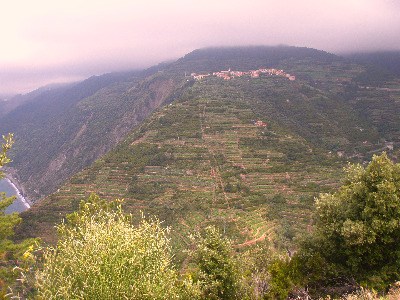 Return from Vernazza to Cinque Terre

Return from Vernazza to Italy-Tours-in-Nature