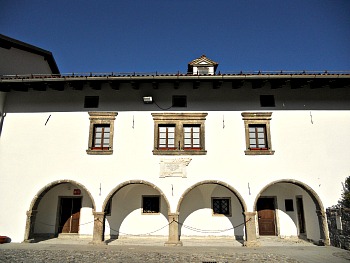 The small village of Preone is situated in a secluded location just off the main Tagliamento valley in Carnia. Its main attraction is the Naturalistic exhibition “Preone – 200 Million Years”, hosted in the atmospheric setting of the prestigious Palazzo Lupieri, which dates from the 16-17th century and is right in the middle of the village. It is, in fact, one of the foremost examples of classical Carnian architecture, with an airy portico and loggia at ground level, surmounted by the windows – single or ‘binate’, double – on the first floor, framed in local stone (the building is pictured above). Hosted here are a permanent exhibition, a didactic laboratory and a conference hall.

The itinerary within the museum describes the geo-morphological and natural characteristics of this territory (flora, fauna and climate) with the aid of dioramas and exhaustive illustrations; also, the geological history is being retraced through the fossils that were found in the area and that are now being exhibited.

The territory of Preone is quite well-known in the paleontological field – namely for the discovery of a type of pterosaurs that was actually named Preondactylus buffarinii, in homage to both the place where it was found and the scholar responsible for the finding. Another good specimen of a flying reptile is conserved at the Geological Museum of Carnia in Ampezzo.

Adjacent to the exhibition – and as a complement to the visit – it is certainly worthwhile to embark on the easy excursion along the “Stavoli Lunas” Nature Trail, just to the north of the village. It is a self-guided walk that displays several signs which help to “read” and make sense of the landscape around, highlighting its geological and paleontological characteristics as well as the local flora and fauna. The circular walk takes no more than two hours to complete, and is very pleasant – especially in spring, when many flowers are in blossom. It offers the possibility to integrate a visit to the museum with direct observations in Nature.

The trail is about 3 km long; it is not very steep (from 525 m to 675 m), and it follows the minor valley of the Seazza stream. This little side valley offers an easy, almost didactic opportunity to understand the geology of this area and of this part of the Dolomites at large.

The most ancient layer of rock to be seen here is the one formed by the so-called “Dolomie Cariate”, which were deposited 210 million years ago at the end of a period known as “Carnian” – part of the Triassic – that takes its name precisely from this region. Above these rocks are the layers of the “Dolomia di Forni”, which were formed about 200 million years ago by deposition of sediments (calcareous silts) in a basin flanked by what may be compared to a Tropical sea habitat – such as the Bahamas today. The fault-line between the two formations is clearly visible in the Seazza riverbed. This was also the time when Main Dolomite (“Dolomia Principale”) was formed, but this happened mainly outside of this area (especially to the south). The most recent rock formations are the different types of limestone (grey, black and red: the famous “Rosso Ammonitico”) dating to the Lower Jurassic; these become more visible towards Monte Verzegnis (1,804 m).

The colour of the Dolomite rock formations varies from dark grey to brown; these are arranged in thin layers that show how the deposition of calcareous silts on the seabed occurred, while along the seams nodules of black flint can sometimes be found. These rocks, deposited in a marine environment poor in oxygen, are believed to be at the origin of petroleum, thanks to the abundance of organic matter that was trapped into them; to this day, they release a strong smell of hydro-carbon when they are broken.

This area is also important for the fossil finds: they are usually located in the thin calcareous layers, and they can be either of vegetal or animal origin; the former are the least known and the most difficult to identify, while the latter are usually crustaceans or fish, usually easier to identify. The Pterosaur (a flying reptile) that is exhibited at the Preone Paleontological Museum was also found in this area.

At the end of the Cretaceous (65 million years ago) the Alpine chain began to emerge, due to the compression between the African and European landmasses. Then, during the Cenozoic (65 to 2 million years ago) the most dramatic movements happened, which led to several rock layers being lifted and folded; many over-thrusts were generated, and the Alps gradually gained the familiar shapes that we still see today. Lastly, the Quaternary era started 2 million years ago, and because of the many climatic changes, very cold phases (known today as ‘glaciations’) alternated with others during which the ice melted. The ice, in its track, brought with it mobile pieces of rocks known to us as ‘moraines’, while the last ice retreat is responsible for the formation of rivers and the shape of the valleys.

The dominant tree-species along the trail is definitely beech. This is a majestic tree that denotes most Alpine formations at low-medium levels (in Friuli it descends at lower altitudes than in other sections of the Alps – as low as 400 m – as the climate is here both colder and rainier). The typical smooth, light grey bark makes it usually easily recognizable, and so do the sharply pointed buds and the vivid green, lucid leaves in spring. All in all, it is one of the most beautiful and stately trees that can be observed in Nature.

Below 900-1000 m, it tends to mix with species that are typical of warm woodland formations – as indeed here, where it can be observed interspersed with Hop hornbeam (Ostrya carpinifolia), Manna ash (Fraxinus ornus), Mountain ash (Sorbus aria), Field maple (Acer campestre) and hazelnut (Corylus avellana).

Other Trails in the Area

It is also possible to embark on other excursions that have in Preone their starting point. The whole Seazza stream valley – a side valley off the Tagliamento, where the walk is also located – is world-famous among paleontologists for the importance of the fossils that were discovered here, especially during the Triassic.

The Chiampon valley is by the small pass that then leads on to the other side of Monte Verzegnis (1,804 m), connecting also with the road that comes from Forcella Chianzutan. This is an area of vast, open meadows with some old barns and other rustic buildings, which offers splendid, open views on the pastures at the foot of Monte Verzegnis.

Verzegnis and the “Art Park”

The village of Verzegnis is interesting in its own right, albeit for different reasons. Here, Egidio Marzona – one of the foremost world art collectors, born in Germany but of Carnian origins – after re-establishing contact with his native land founded the “Art Park”, one of the most interesting experiments in Landscape Art in Italy. Today, the Park contains 1800 works of art, belonging for the 75% to the three main currents of the 1960s and 70s: Minimalism, Conceptual Art and Land Art.

Here, the concept of art collection goes one step beyond the acquisition of complete works, and aims to interact with the surrounding environment. The contributing artists are invited to 'read' the context, and create works expressively thought with the space of the “Art Park” in mind. This means that the artist is left free to establish the type of relationship between his or her work and the nature of the place, like in a dialogue. Therefore, the “Art Park” is born out of the conjoined intuition of the art collector and the free interpretation of the context on the part of the artist.

The works of art are by renowned names on the world scene, such as Nauman, Long, Grosvenor, Nonas, Dan Graham, Robert Berry, Lawrence Weiner and Bern Lohaus. All interventions have as a starting point an apparent “anti-mimetic” approach – that is, they do not seem to engage and communicate with their context. But it is precisely from this opposition that dialogue is born; in fact, while following the paths within the park, the visitor is invited to enter in relationship with the space – to explore and comprehend it in his or her own way.

One aspect that certainly strikes in the “Art Park” is that the visitor is left free to approach the works of art in an order which can be absolutely personal; at the same time, there is total freedom to choose the vantage points from which to observe them. This search for an ideal vantage point actually allows for the discovery of new elements within the landscape – and that is the way through which art and the territory start to interact with each other and create a dialogue which will be different for every visitor.

The visit to the Paleontological Museum in Preone, the “Stavoli Lunas” Nature Trail and the “Art Park” in Verzegnis can therefore be combined to make an interesting single day out roundtrip. 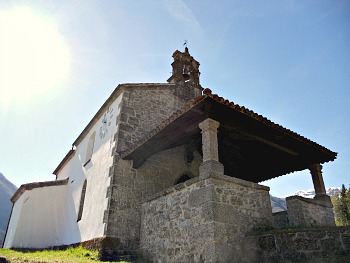 Near Preone is also the village of Socchieve, which is quite interesting for its various monuments – especially the churches. One in particular is worth a visit: the church of San Martino, isolated on a hillock right in the centre of the village. The small but beautiful church of Saint Martin, with its architectonic structure (entrance portico, rib-vaulted belltower, trussed interior, terracotta tiles cover) represents one of the most typical Carnian sacred buildings and an unsuspected jewel in such a secluded location (the exterior of the church is pictured above).

Its artistic value cannot be underestimated: despite having been damaged by the 1976 earthquake it was painstakingly restored, and it hosts an important cycle of frescoes that Gianfrancesco da Tolmezzo – perhaps born in this village – executed circa 1493: they represent the Doctors of the Church in the choir's vault; the Nativity and Apostles in the end wall and the Apostles and Redemptor on the side walls; the Annunciation and Saints on the triumphal arch; Eight Saints under the arch; the Saints Sebastian and Roch are on the pillars, while on the hall’s walls to the right is a composition with Saint Martin and the Poor, to the left the Trinity and a Saint; in the left-hand arch, also, are the date and signature of the artist (the amazing interior of the church is portrayed below). 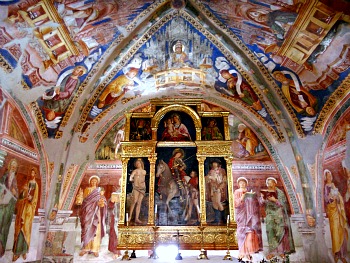 Besides this more famous cycle, there have been additional finds in the last few years: in the Sacristy and at the base of the small apse were recently discovered remains of Roman frescoes of good quality (Christ in an Almond with the Evangelists’ symbols; fragments of more Apostles’ heads; other decorations), which further testify to the ancient origins of the building.

Return from Preone to Carnia

Return from Preone to Homepage