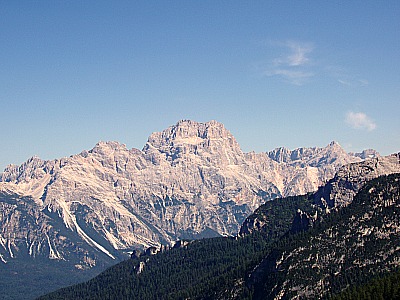 Monte Cristallo (seen in the image above from a distance) is a massif in the Dolomiti Ampezzane, just to the NE of Cortina d’Ampezzo, and its highest peak reaches 3,221 m. This mountain group includes within its natural, historical and administrative boundaries also part of the municipality of Auronzo di Cadore.

Its summit was conquered for the first time by the Viennese mountaineer Paul Grohmann, accompanied in that instance by two famous Alpine guides from Ampezzo, Santo Siorpaes and Angelo Dimai.

It is one of the highest, most majestic and famous mountains in the whole Dolomites; it crowns and closes to the north the Ampezzo basin (Conca di Cortina), while at the base its rocks seem to merge with those of the underlying Pomagagnon (2,450 m; in the image below, a winter view of the Conca di Cortina with the Cristallo in the setting sun). 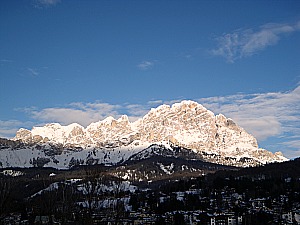 The Cristallo group separates the Ampezzo Dolomites from those beyond the Upper Ansiei valley; communication with this latter valley is possible through Passo Tre Croci (1,805 m; see below), which also represents the first pass to be encountered  on the Cristallo roundtrip (anti-clockwise), with beginning and end in Cortina. This is also the order in which the sights are described in this page.

On the Cristallo group there are six among Alpine huts and restaurants: Rifugio Lorenzi (2,932 m), Rifugio Son Forca (2,235 m), Ristorante Rio Gere (1,680 m), Ristorante Lago Scin (1,336 m), Ristorante Staulin (1,370 m) and Ristorante Son Zuogo (1,800 m). In this context, only the first two of these are really relevant to our topic of exploring nature and facilitating a visit to the area; these same two huts can also be reached by means of a cable car.

A word of warning: the other huts are more similar to busy restaurants in service of the many ski slopes rather than proper Alpine huts, and I would not count them among the most enjoyable or characteristic facilities in the area, but they can nonetehless turn out to be useful, especially at the beginning or after return from a walk – bearing in mind, also, that Cortina is one of the most expensive resorts in the Dolomites, and those types of establishments tend to reflect that.

On the Cristallo group there are two ‘Vie Ferrate’ (iron ways); both start at the Forcella Staunies, in the vicinity of Rifugio Lorenzi (see below), which can be reached also by chair lift/cable car. The longest is the ‘Via Ferrata Ivano Dibona’, while the ‘Via Ferrata Marino Bianchi’ is shorter.

The area is also an important skiing hub, and it includes important ski slopes, with the following three chair lifts: Cristallo, Son Forca-Forcella Staunies; Son Forca-Padeon. The two slopes of Mietres and Monte Faloria belong to the same skiing district, even though – strictly speaking – they are on the other side of the valley (it is also worth mentioning that – altogether – these slopes are part of the Dolomiti Superski, which collectively forms the most extensive skiing carrousel not just in the Alps, but in the whole of Europe).

Alpine Huts and Trails in the Area

The Rifugio Guido Lorenzi is an Alpine hut located right in the middle of the Cristallo group, and despite being closer to Cortina (and more easily reached from that location), it is nonetheless situated in the municipality of Auronzo di Cadore, at 2,932 m of altitude.

Rifugio Lorenzi is located along the route of the ‘Via Ferrata Ivano Dibona’, and it can be accessed straight from Passo Tre Croci (1,805 m). The ascent to this hut on foot is probably one of the most rewarding hikes in the Dolomites, and it is not a particularly difficult one, despite being long and steep in some parts; a good compromise is to take the first stretch of chair-lift (which covers, in fact, the less interesting section of the hike; see below) and continue on foot from there.

As anticipated, Rifugio Lorenzi is also easily reached via a chair-lift from the locality of Rio Gere (1,698 m; along the Great Dolomite Road just before the Tre Croci Pass) to Son Forca (2,215 m); from there, a characteristic egg-shaped cable car (ovovia in Italian) takes to the hut, from which an astounding view can be enjoyed over the Ampezzo basin, and well beyond into the Dolomites’ heartland.

From the Lorenzi hut also depart the two ‘Vie Ferrate’ mentioned above – the ‘Ivano Dibona’ and ‘Marino Bianchi’.

This relatively low pass connects the Boite valley and Cortina d'Ampezzo with Misurina, Auronzo di Cadore and the val d’Ansiei. By the pass there are some military structures (bunkers) related to WW1, part of the ‘Sbarramento Passo Tre Croci’ of the ‘Vallo Alpino’ – a defensive line that ran all through the eastern Alps, close to what was then the frontier with Austria. From the pass two paths depart to Rifugio Vandelli, in the Sorapiss group (see below).

The three crosses remind of an event that really took place there in 1789, when a mother and her two sons – on their way from Auronzo di Cadore to Cortina – died of cold exposure; since then and in their memory, the pass took the current name. The picture below shows a wintry image of the changing aspect of the Cristallo, as seen from the National Road near Passo Tre Croci. 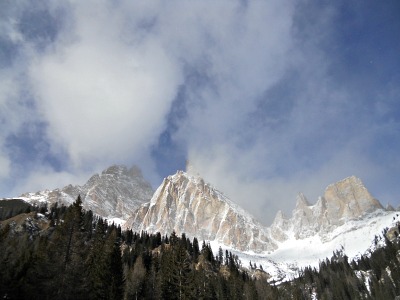 The Pomagagnon (2,450 m) is a small mountain group in the eastern Dolomites, situated to the N of Cortina d'Ampezzo and northeast of San Vito di Cadore; its highest summit is not very high, but apparently the Pomagagnon looks like one of the most elevated peaks in the Ampezzo Dolomites.

As a matter of fact, its ‘height’ is the result of an optical illusion, due to at least three factors: the closeness to Cortina (it is like a ‘rocky curtain’ very close to the actual town), its considerable length, and the fact that at first sight it seems to be merged with the higher wall of the Cristallo, which rises effectively behind it and is in all respects a separate range. Despite all that, as the Pomagagnon lies so close to town and seems to be closing the skyline behind the Ampezzo basin to the north as in a coronet, the visual impact and the scenographic effects are really remarkable, turning effectively this mountain into one of the most emblematic of the whole Conca di Cortina – despite not being the highest (in the image below, the Cristallo is to the right, while to the left is the Pomagagnon, looking deceptively higher).

The “via ferrata Albino Michielli Strobel” reaches Punta Fiames, which belongs to the Pomagagnon group. 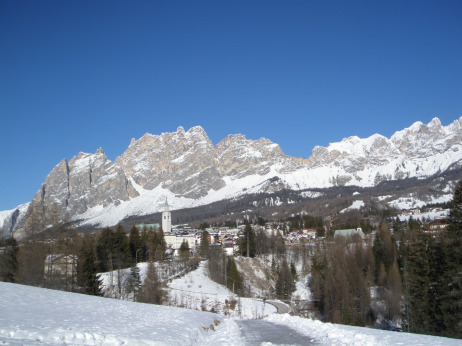 The Sorapiss group (Gruppo del Sorapiss or, simply put, Sorapis) is one of the main mountain groups in the Dolomites, and part of the Dolomiti Ampezzane; it is subdivided between the municipalities of Cortina d'Ampezzo and San Vito di Cadore. The name comes from the Ladin root -pisc (from which -piscé; to urinate), which is a very common place-name in the Ladin speaking area, where it is being given to many mountains, peaks and other localities. In this case, the name was referred to the position of Lake Misurina, as it is laid above (‘sora’) the waterfall. Not surprisingly, the section under the waterfall is called ‘Sopisc’ (literally, below the waterfall).

The Sorapiss group is constituted of a a central massif that includes Punta Sorapiss (3,205 m), Croda Marcora (3,154 m) and the Tre Sorelle (‘Three Sisters’, 3,005 m), from which two ridges depart towards the north. Particularly celebrated is the view of this mountain from the Lago di Misurina, in the municipality of Auronzo di Cadore, from which the Sorapiss appears like a grand rocky amphitheatre that is being mirrored by the waters of the lake (see image below). The group is crossed by the Alta via No. 3, so-called of the Chamois and the Alta via No. 4, Grohmann. 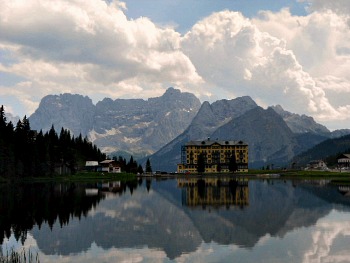 The first ascent to the summit of Sorapiss was accomplished by the Austrian mountaineer Paul Grohmann in 1864. The feat was repeated in 1929 by Emilio Comici and G. Fabian on the peak of the ‘Seconda Sorella’ (‘Second Sister’): the first ascent of 6th degree of difficulty to have ever taken place in the Dolomites.

The main Alpine huts present in the area are Rifugio Tondi di Faloria (2,327 m), Rifugio Alfonso Vandelli (see below) and Rifugio San Marco, all run by the CAI (Alpine Club) of Venice. There are also some permanent bivouacs: the Silvio Slataper and the Emilio Comici, which both offer a basis for the Alpinists venturing in high altitude. There are also three important ‘vie ferrate’ that cross this mountain group: the Francesco Berti, Carlo Minazio and Alfonso Vandelli.

The Rifugio Alfonso Vandelli (1,926 m) has quite a tormented history. It was first erected in 1891 by the German Alpine club (the area was still Austrian), but then it was destroyed a few years later by an avalanche. After rebuilding it, the hut became Italian at the end of WW1, in 1918. Re-erected in 1924, it was ravaged again – this time by a fire; the new building that opened in 1966 is the one we still see today.

The Vandelli hut is a very important base from which to explore the highest reaches of Sorapiss, and it can be accessed either from Passo Tre Croci with two distinct paths of different lenghts (2h or 3h) or from Federavecchia in the Val d’Ansiei (on the Auronzo di Cadore side; in the picture below, the Croda Marcora is part of the Sorapiss group, and its characteristic red-coloured rock formations are seen here from San Vito).

A word of warning: it is worth bearing in mind that crossing the whole Sorapiss range on foot takes two days, so it is vital to plan ahead at which hut to stay overnight. 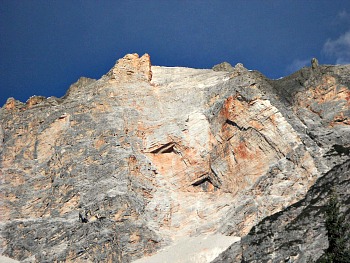 A legend tells the story of Misurina – a small capricious child who was literally kept in the palm of his hand by his father, the giant King Sorapiss, who went to great lenght in order to grant all the wishes of his daughter. One day she asked him to obtain for herself the magic mirror from the Fairy of Monte Cristallo – the fairy accepted, but at one condition: King Sorapiss had to be transformed into a mountain. Out of love for his daughter, the king agreed, but during the last moments of his transformation, King Sorapiss saw the child precipitate from his own slopes, and his stream of uncontrollable tears went on to form the lake under which the girl and her magic mirror would lie forever: the Lago di Misurina, in whose waters this royal mountain would forever be reflected (see another atmospheric image below). 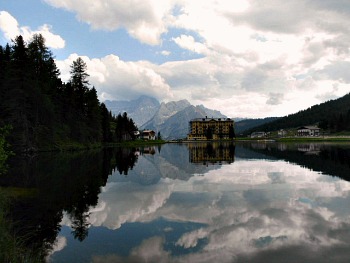 If you are following the circular trip around the Cristallo, the return route will be through Carbonin/Schluderbach, Cimabanche/Im Gemärk and Ospitale, which incidentally also hosts the main architectural gem of the area – namely, the tiny church of the Saints Biagio and Nicolò (see image below). It is in fact Ampezzo’s most ancient religious building, with fragments of 12th-13th century frescoes. 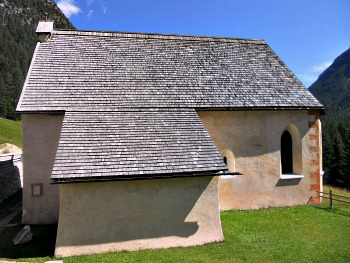 In the vicinity of these localities also start several trails that allow to access the Cristallo from the other side (as seen in the picture below) – even though it has to be pointed out that the paths ascending from here are steeper and a lot more demanding. On the other side of the valley are instead many accesses to the trails leading into the Ampezzo Dolomites natural park. 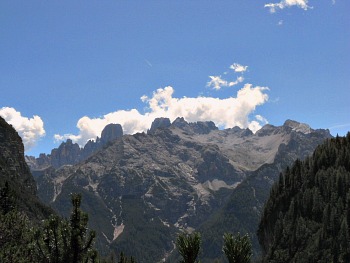 Return from Cristallo to Cortina

Return from Cristallo to Italy-Tours-in-Nature