Selva di Cadore and the Val Fiorentina: the Quieter Side of the Dolomites. 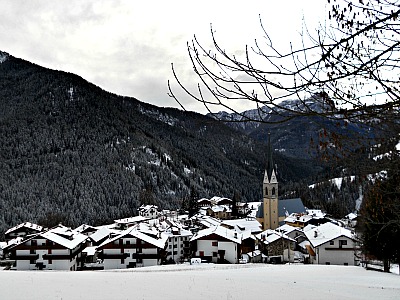 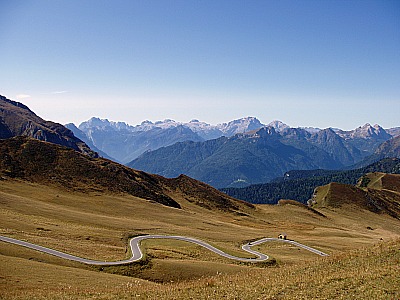 Despite lying at the back of the renowned Ampezzo basin (Conca d’Ampezzo), Selva has nothing to envy to it: the peaks of the Dolomites are all around, as well as extensive conifer woodland. To use an old-fashioned musical analogy (dating from vinyl times), one could say that Cortina and Selva di Cadore are like a 45s record with two “A-sides”!

Despite the name, though, the area belongs geographically to the Zoldano sub-region, and therefore – when coming from the south – it can best be reached from Longarone and Forno di Zoldo.

Driving on past Zoldo Alto, the National road climbs up the slopes towards Forcella Staulanza (1,773 m): a magnificent route that – either side of the pass – runs among monumental, pristine conifer woods.

The pass itself is dominated by the summit of Monte Pelmetto (2,993 m), after which one descends into the Val Fiorentina proper, towards Selva (below, an image of the extensive woodlands with the vernacular architecture of Selva). 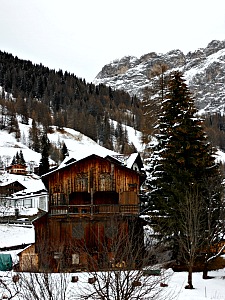 The municipality of Selva di Cadore – which, like Zoppè, belongs to the part of Cadore known as ‘Oltremonti’, as it lies beyond the Boite watershed – was  inhabited historically mainly by a colony of miners.

The village gathers a good number of old wooden houses (see first image below), mostly built in the vernacular style – especially in the elevated hamlet of L’Andria (second picture below), which displays an impressively long sequence of buildings, traditionally facing south to make the most out of sunlight. 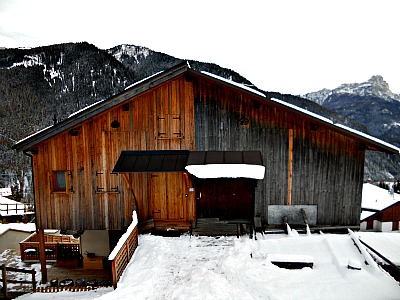 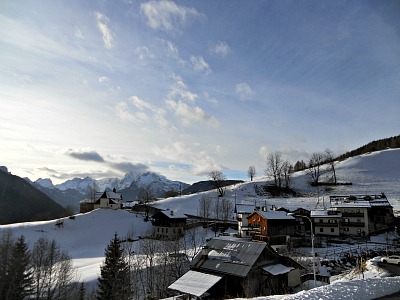 There are also two interesting churches in Selva: San Lorenzo (Saint Lawrence; see image below) is in the centre of the village, and it was first erected in the 13th century, then remodeled: it contains a cycle of 16th century frescoes by an unknown painter (perhaps Giovanni da Mel) and works of another painter from Cadore, Antonio Rosso. 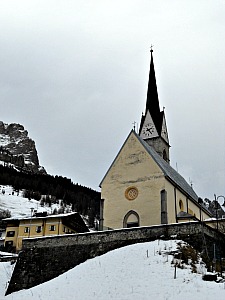 The church of Santa Fosca, in the nearby hamlet of Pescùl, is also gothic in appearance, and presents a gigantic depiction of Saint Christopher on the external façade.

The newly refurbished Civic Museum (see image below), dedicated to Vittorino Cazzetta (a local archaeologist and mountaineer), is of geologic and archeologic interest; its displays revolve around the famous finds of the so-called “Uomo di Mondeval” (‘Mondeval Man’): a lesser version of the iceman Ötzi that came to light from a Mesolithic site up nearby Passo Giau, and which  took its name from the location where it was found.

The remains are believed to be those of a hunter who was buried here about 7,400 years ago. There is also an historic section that documents the mining past of the community, as well as evidence of the dinosaurs’ footsteps at nearby Monte Pelmetto. 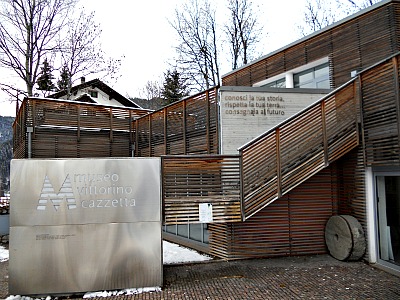 Climbing further up in altitude from Selva di Cadore, one can reach the aforementioned Passo Giau (2,233 m), connecting the area with Cortina d’Ampezzo and an ideal starting point for hikes on the Croda da Lago (2,701 m) group.

From the Pass, climbs start also towards the striking Cinque Torri (‘Five Towers’), an impressive gathering of five isolated Dolomite outcrops, the tallest of which peaks at 2,361 m (below, see another image of the beautiful mountains surrounding Passo Giau). 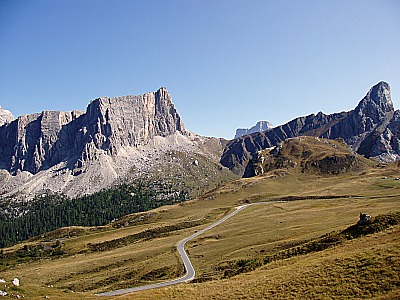 The possibilities for walking and hiking here are endless; the Alta via No. 1 (Alpine Highway no. 1) passes in the vicinity, while it is also possible to enter the area dedicated to the open-air WW1 Museum (Museo all'aperto della Grande Guerra).

This is part of a network of historical trails that straddle the two sides of the Falzarego valley between the Cinque Torri and the Lagazuoi (2,835 m; see Tofane), in an area that saw bitter fights between the Italian and Austro-Hungarian troops.